The old “I’m a Christ Follower, Not A Christian” gong seems to be ringing once again. 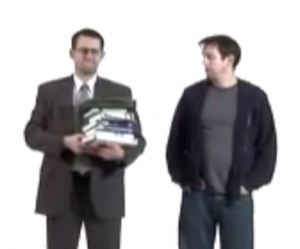 Thanks to the Spiritual Formation movement, Christian or Christ-follower is a distinction that is being made more and more today, and it claims to make a clear divide between those who truly follow Jesus and those the well-meaning Christ followers believe are either deluded or faking it. After all, we don’t want to be linked in any way to those who carry signs at funerals, who might vote Republican, who murdered millions of Jews as few decades ago or who were responsible for the Crusades a few centuries ago. But what about Acts 11:26, where the name Christians was given to those who left behind their old faiths to be transformed by Him? These were the men and women who actually converted, repenting of their sins and even dying because of the title Christian:

For a whole year they met with the church and taught a great many people. And in Antioch the disciples were first called Christians.

Many Christians around the world are martyred today, not because they say they “follow” Jesus, but because of who they are: Christians.

Remember that video series on YouTube.com a few years ago called “Christian No More” (by Christian Community Church)? In a classic Mac – versus PC parody, the Christian is portrayed as the uptight white guy in a suit and tie with a Jesus bumper sticker, while the cool Christ Follower is the popular young hipster with the whisker stubble and Bono on his iTunes.

Interestingly, most of the leaders who seem to be downplaying the name Christian and promoting the appropriation of the term “Christ follower” are contemplative spirituality proponents. One contemplative advocate, Rick Warren, had the term throughout his former pastors.com website. Lee Strobel refers to it in his book Case for Christ (Student Edition), and Wesleyan pastor David Drury has a Christ-Follower Pop Quiz on his web site to help determine if you are really a “Christ Follower.”

Which brings us to the Shane Hipps video and article over at alittleleaven.com’s Museum of Idolotry:

Shane Hipps Says “Jesus Doesn’t Claim Christianity As His Own”

Here is Shane Hipps, former co-teaching pastor with Rob Bell at Mars Hill in Grand Rapids, blowing winds of false doctrine designed to make you believe in universalism rather than Biblical Christianity.

The Holy Spirit warned us about men like Shane Hipps in Ephesians 4:10–16 which says:

“He who descended is the one who also ascended far above all the heavens, that he might fill all things.) And he gave the apostles, the prophets, the evangelists, the shepherds and teachers, to equip the saints for the work of ministry, for building up the body of Christ, until we all attain to the unity of the faith and of the knowledge of the Son of God, to mature manhood, to the measure of the stature of the fullness of Christ, so that we may no longer be children, tossed to and fro by the waves and carried about by every wind of doctrine, by human cunning, by craftiness in deceitful schemes. Rather, speaking the truth in love, we are to grow up in every way into him who is the head, into Christ, from whom the whole body, joined and held together by every joint with which it is equipped, when each part is working properly, makes the body grow so that it builds itself up in love.”

This reminds me a lot of emerging church leader and labyrinth promoter Dan Kimball’s book called, “They Like Jesus, But Not the Church,” which promotes the idea is that you can believe in Jesus, but you don’t have to identify yourself as a Christian or part of the Christian church. In some missionary societies, they teach people from other religions that they can keep their religion, just add Jesus to the equation. They don’t have to embrace the term “Christian.” Those who teach the highly problematic Kingdom Circles method of contextualizing to Muslims and other faiths do that astoundingly well:

This is why the Spiritual Formation movement (which is promoted by Purpose Driven, Willow Creek, the emerging church, etc) is so dangerous and misleading. It not only divides the Bride of Christ, it teaches people that anyone can enter the Kingdom of God just by practicing a few disciplines designed to make you look and act like Jesus. In other words, Jesus becomes a model or an example who can be followed and mimicked. For example, Ken Blanchard, says Jesus is a perfect model to follow. That’s why he talks so much about leading like Jesus would lead. But Blanchard has shown time and again that he believes meditation is a key factor in becoming like Jesus. Church, did you know that Blanchard is himself a practitioner and promoter of Buddhist and New Age techniques? And yet many of our churches follow the Saddleback or Willow Creek model that employs Blanchard and Drucker practices!

Jesus did not come to be a business model; He came to be a Savior who died for our sins. And those who know and follow Him is his precious Bride, the Body of Christ: Christians.

2 Responses to “I’m a Christ Follower, Not A Christian” gong still rings