Posted By Amy Spreeman on May 8, 2017 in Leaving the NAR Church
Share

Here is Kara’s own story, in her words: 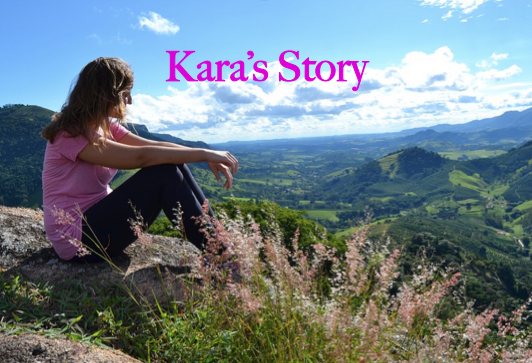 I was raised by God-fearing and loving parents who took all of us children to church every Sunday.  My dad was military and we traveled a lot with him, but as soon as we settled in a new place, he and mom looked for a good, thriving local church (Baptist usually), that had fellowship meetings, Bible studies and activities our family could participate in.  Being involved in church and community and volunteering in both was part of our upbringing.  I was 8 years old when I answered a salvation call and was water baptized shortly thereafter.   I was taught at a young age to read, memorize and study the Bible.

During my teen years I became a follower of the world and turned my back on God.  I never stopped believing, just didn’t put Him first anymore.  Eventually, I began to experiment with drugs, alcohol, rock music, and sex.   I had strayed far off the straight and narrow path.  Those were very dark and dangerous years in which I lost many friends to car accidents, overdoses and even suicide.

After years of a life of rebellion and ruin, I had what I call a Damascus Road experience when in an instant God showed me what could happen to me if I continued in my wickedness.  A holy fear of God overwhelmed me, I fell to my knees repenting with sincere heart and in His mercy and grace I found forgiveness and love.

I began to open my heart once again to a life of dedication and service to Him.  I visited churches and became a member of an Assemblies of God church that taught the word and allowed much liberty in worship, something I had not experienced in my Baptist upbringing.  I was very moved by the sincere worship, prayers and commitment to God many of the members exemplified.  The first 10 years there were flourishing years of personal growth, ministry, and relationship with God and others.  However, things would change in the church and in my beliefs.

Our Pastor and leaders started sharing the latest book, prophecy or new thing from NAR backgrounds; Rick Joyner, Mike Bickle, Peter Wagner, to name a few. Our church was prophesied to be a Healing church; a hospital for the wounded.  To get ready we were encouraged to seek the gifts for body ministry and to establish a Five-Fold ministry in our church.  Many of us began to travel to the “watering holes and well springs” of revival.

My first trip was to Brownsville in Pensacola, Florida just a year after “revival” had broken out there when Evangelist Steve Hill had come to speak.  I was very moved by his sermon and also drawn to the demonstration of Holy Ghost “fire” being imparted.  People’s testimonies of healings and deliverances were heard in every service.  After receiving such an impartation myself, I was like a sponge soaking up as much of God as I could contain and always on a quest for more.  Over the next 10 years I would read all the newest books, go to all the conferences, trainings, meetings and have so many of the anointed ones pray for and lay hands on me.

I became super spiritual in prayer, worship and good works, spending hours daily praying, listening to worship music and working in the church as worship leader, youth leader, church secretary, girls ministry, among other duties.  I couldn’t be busy enough and I realize now I was “purpose driven” and always striving to maintain the high I got from all the spiritual exercises.

Then in early 2008, my husband became very ill.  I had to step out of church ministries when I became his full time caregiver.  I was unable to attend church most Sundays.  I went through a type of withdrawal not being able to keep my spiritual high that I got from all the ministering for God.  That spring a friend told me about revival that had broken out in Lakeland, Florida, and that many people were being healed.

The revival was on the internet, and I wouldn’t have to travel with my ill husband as the healing anointing was imparted right through the screen and into my living room.  So, with faith and excitement I listened through the lengthy worship service.  Then the evangelist (Todd Bentley), preached and instructed viewers to lay hands on the screen for impartation to occur.  I told God I would use that anointed impartation to lay hands on and heal my sick husband, but as I reached my hands toward the screen I heard the voice of the Lord say “That is NOT my Spirit”.  I recoiled almost falling backward and in an instant (just like my Damascus Road God  moment), my eyes were open to spiritual truth.

I was flabbergasted.  Like a movie, memories began to play of conferences, meetings, false teachings, preachings, false words I had hungrily received and believed.  I felt like the rug had been pulled out from under my feet.  I could hardly believe that almost 10 years of spiritual pursuit had been wrong.  I demanded of God why He never showed me this truth before and immediately I saw clips of memories where He had, but I chose not to listen, always making excuses for that person or act.

I had trusted feelings, emotions and spiritual hype over His written word and the gentle leading of His Holy Spirit.  I disregarded every red flag and allowed myself to be deceived.

It was not enough to repent to God; I went to my husband, my children, my pastor, my worship team and others I had influenced with false teachings and asked their forgiveness.  Some didn’t understand why I needed to repent and some accused me of ‘touching God’s anointed’, heresy hunting and so forth.

My husband came very near to death and our next six months we spent more time in hospitals than home.  There were times I was so exhausted I had no energy to pray.  I had no time to pick up my guitar and play worship music.  I couldn’t invite anyone to come visit as his immunity was low and we couldn’t
risk infection.  During that time “Jesus” was the only prayer I could muster.  Just. His. Name.  It was enough.

When I was so tired and lonely, He was with me.   He spoke to my spirit that His gospel is simple.  I had made it so complicated.  Over time I was delivered and set free from many ungodly impartations that I had accumulated over the years and all religious striving, false spirituality, pride, false humility, etc. was gone.

I see these false movements and teachings spreading across denominational lines. I believe they are part of the movement for a one-world religion, bringing, Catholics, Muslims, and all religions together in unity.  I pray for my friends and family who are involved in this falseness to have their eyes open the way mine were.

Kris Vallotton: Prosperity Preacher Exchanging Love for Wealth
It is not ‘character assassination’ for the church to be the church