Posted By Amy Spreeman on November 16, 2015 in Discernment 4
Share 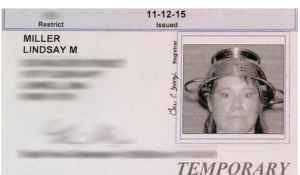 Yes, free speech. I get it. But when a state government institution changes its policy to legally allow one person to hatefully mock a people group, it is the picture of a world turned completely upside down:

BOSTON (November 15, 2015) — A member of the “Church of the Flying Spaghetti Monster” is being allowed to wear a colander in her driver’s license picture.

WFXT reported that Lindsay Miller was originally denied the right to wear the colander in the picture, but won the appeal.

Miller claims she is a Pastafarian, also known as a member of the Church of the Flying Spaghetti Monster.

“As a member of the Church of the Flying Spaghetti Monster, I feel delighted that my Pastafarianism has been respected by the Massachusetts RMV,” Miller said. “While I don’t think the government can involve itself in matters of religion, I do hope this decision encourages my fellow Pastafarian Atheists to come out and express themselves as I have.”

Pastafarian is a social movement that promotes a light-hearted view of religion and opposes the teaching of intelligent design and creationism in public schools.

It’s time for Obama to make a choice: lead us or resign
No European democracy has the perfect way to handle Islam