Posted By Amy Spreeman on November 13, 2015 in Discernment 76
Share 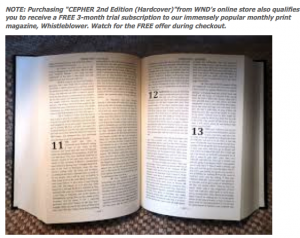 Recently I’ve been seeing a lot of advertisements for The Cepher Bible, a new translation of sorts brought to you by WND, where editor Joseph Farah sells Cepher alongside The Harbinger, The Rabbi Who Found Jesus, the Mystery of the Shemitah and other questionable books.
WND is a source to mark and avoid for discerning Christians, as I discovered several years ago when I first learned that the site sponsored Sid Roth’s hour-long video tutorial on how to do the New Age Soaking prayer.
But with the growth of the dangerous Hebrew Roots Movement, there is concern that WND’s powerful readership numbers may be aiding and abetting false teachers to reach a whole new audience.
Christian Answers for the New Age author Marcia Montenegro recently alerted her readers:

Leaving Lysa: Why You Shouldn’t Be Following Lysa TerKeurst or Proverbs 31 Ministries
ISIS is Near, No One is Safe and Why We Should Think About It

76 Responses to Hebrew Roots: About that Cepher “Bible”