Posted By Amy Spreeman on November 28, 2016 in Discernment
Share 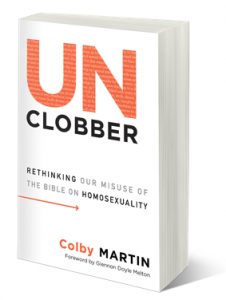 Another pastor, another dreadful book in the same vein as Matthew Vines’ book, God and the Gay Christian. This time, Pastor Colby Martin takes on the so-called “clobber verses”. You know, the Scriptures that clearly teach homosexuality is a sin:

“The Bible has been misused, to justify keeping gay people out of our churches and telling same-sex couples that they cannot be together,” Pastor Colby Martin told NBC OUT.

And that’s how Colby Martin – who once was a “rising star in the Conservative Evangelical church,” is working to change the way Christians view God’s  breathed-out Word.

Before I go on, this verse from 1 Corinthians 6 is pretty clear – AND very hopeful in that Christ died for the very sin Martin is trying to make palatable:

NBC “Out” reports that Martin began to realize that his head and heart were not in alignment when it came to homosexuality:

“I grew up in a faith tradition that cherished and honored the Bible, and in my late teens when I really dug in and took following Jesus seriously, I also fell in love with studying the Bible,” he said. “Anyone who studies the Scriptures long enough will eventually come across verses that simply don’t sit well with us. Whether it’s telling slaves to obey their masters, or telling women to be silent in church, or saying that gay people deserve to die, the Bible is full of complicated ideas.”

Here is the story: 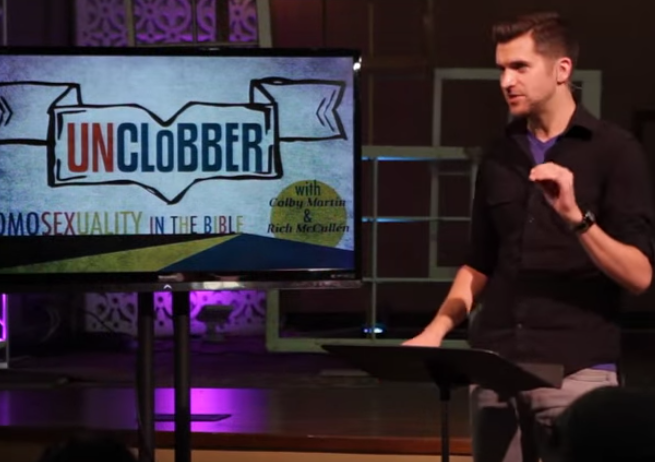 “Have you ever misused the Bible?” This is how the second chapter of Colby Martin’s book, “UnClobber,” begins.

“Before you answer that, I’ll share two examples of how I have” and then Martin explains how he broke up with Jenny, a young lady two years ahead of him in high school. In a few sentences, he explains how, after the magic of the new relationship wore off, he broke up with her using scripture.

“…the Bible says do not be unequally yoked with unbelievers … I had no choice.”

This story is just one of many shared by Martin in “UnClobber: Rethinking Our Misuse of the Bible on Homosexuality.” The book reframes the biblical texts historically used to discriminate against the LGBTQ community and deny them access into worship spaces.

“My whole point is, the Bible has been misused, to justify keeping gay people out of our churches and telling same-sex couples that they cannot be together,” Martin told NBC OUT. “‘UnClobber’ not only reveals the results of my study of the Bible on homosexuality, it also tells the story of how I came to align my head with my heart through a careful, thoughtful and prayerful study of the clobber passages.”

There are six passages in the Bible, Martin states, that are considered “clobber passages.”

“They have been used to make gay people believe that you cannot be both gay and Christian. Being told that you are not welcome, that you do not belong, or that you are less than, is a clobbering of the heart, soul and mind,” he said. “At some point these verses became known as ‘clobber passages’ for this very reason. I came up with the term ‘unclobber’ as a way to point to my efforts of showing that the Bible does not actually condemn those who are gay, lesbian, bisexual, transgender or queer.”

By reframing the clobber passages, Martin said he wants to understand how they can fit within the image of God as revealed by Christ. So, he said, what he wants to know is if the verses that have been used for centuries as justification for discrimination against LGBTQ folk were truly intended for those purposes or if there was something else happening that has not yet been revealed.

While pastoring in Arizona in 2011, Martin had a series of moments, he explains in the book, where he began his own process of coming out as a progressive theologian. The first moment took place earlier that year during the Catalyst West Coast Conference, but it was a Facebook post later that year that changed everything.

“Don’t ask, don’t tell” had been repealed, and Martin shared the news on Facebook with the following six words: “I’m glad this day finally came.” Eventually, he was fired from the megachurch he had pastored.

“That led my family and me to lose our faith community, lose most of our friendships and lose our home and sole source of income,” he explained to NBC OUT via email. “This is the pattern of what it means to be human. All the pain and loss I experienced by coming out of the theological closet is only but a taste of the pain and loss for many of those who have come out of the actual closet.”

Martin shares these moments alongside the textual reframing in “Unclobber.” He suggests that his own experience of reconciliation is not an exclusive one.

“My particular journey points to what I think is a universal journey for many, many people. The journey of not only finding alignment between how we feel and what we believe (the head and the heart), but also discovering the difficulty of when your internal convictions no longer match with your external reality,” he said.

The journey can be scary, he points out. But the process can also be rewarding. He hopes that “UnClobber” will serve as a resource but also understands the challenges that a book like this faces.

“First, this book is for Christians who—like me—can identify a tension within themselves. Second, this book is for anyone who identifies as LGBTQ and is also trying to reconcile that with their faith,” he said. “Third, this book can be a helpful resource for those who are currently not open and affirming, and yet are curious about how it is that someone with a strong conservative evangelical background can come to the conclusions I do. I recognize that trying to change people’s mind is a very challenging, if not impossible proposition.”