Posted By Amy Spreeman on November 12, 2014 in Discernment
Share 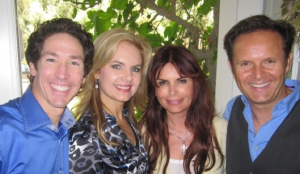 Roma Downey and her husband Mark Burnett, who gave us the unbiblical The Bible and The Son of God films, is now making a 2-hour Lifetime Television series, “The Women of the Bible.”

Stop. (just stop.) Back up to The Bible and The Son of God. These two programs were so error-filled, that we need to review just how far off Downey and Burnett are from biblical truth:

The cast of characters for this new Women of the Bible reads like a who’s who list of problematic ministers: Victoria Osteen, Kay Warren, Australian pastorix Christine Caine, Priscilla Shirer, and Joyce Meyer.

Downey narrates, while the others act out the stories of Eve, Sara, Rehab, Mary Magdalene and Mary.

“Women of the Bible” is a prelude to a mini-series, called “The Red Tent,” starring Minnie Driver which imagines the story of Dinah, the daughter of Leah and Jacob.

Downey is also set to host a series for TLC in 2015 on people who have witnessed real-life miracles.

What do Rick Warren, Russell Moore, Muslims, Mormons and the Pope have in common?
Tony Blair’s Strategy to Battle “Religious Extremism” starts with young