Posted By Amy Spreeman on November 7, 2014 in In the News
Share

Therefore do not be partakers with them; for you were formerly darkness, but now you are Light in the Lord; walk as children of Light (for the fruit of the Light consists in all goodness and righteousness and truth), 10trying to learn what is pleasing to the Lord. Do not participate in the unfruitful deeds of darkness, but instead even expose them.  (Ephesians 5:7-11)

Yes, traditional marriage is worth standing up for. But do we blend biblical Christianity with dark and blasphemous religious systems, joining hands for ANY cause? I am saddened to report the latest hand-holding gathering between Rome and evangelical, Mormon, Jewish, Muslim, and Sikh leaders. 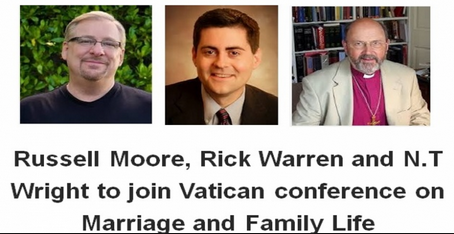 What does light have to do with darkness? Does anyone else see a problem with this syncretism? Or with Yin and Yang in biblical Christianity? I will start with the very strange video on the conference website:

It’s not the first time Rick Warren has joined hands with the Pope and the Roman system, even promoting Rome’s Catholic’s Come Home initiative. And of course the Purpose Driven Life for Catholics. Don’t get me wrong; I do love Catholic people. I hate the false system that keeps them in bondage and lies to them about Christ through its teachings. Here’s the story:

The Vatican will host a two-day interreligious conference later this month to discuss and defend traditional marriage as between one man and one woman. Megachurch pastor Rick Warren, Anglican bishop Dr. N.T. Wright and the Southern Baptist Convention’s Ethics and Religious Liberty Commission head Dr. Russell Moore have accepted invitations to attend “An International Interreligious Colloquium on The Complementarity of Man and Woman” on November 17—19 in Vatican City. Representatives from Judaism, Islam, Buddhism, Hinduism, Jainism, Taoism and Sikhism will also speak; a total of 30 speakers from 23 countries and 14 religions will be featured, according to Catholic News Service.

The conference is designed to gather “leaders and scholars from many religions across the globe, to examine and propose anew the beauty of the relationship between the man and the woman, in order to support and reinvigorate marriage and family life for the flourishing of human society.”

October’s Synod of Bishops drew contention from around the world as it highlighted tensions within the Catholic hierarchy over gays and lesbians and cohabiting couples.

Moore wrote in a post on his website that he is “willing to go anywhere, when asked, to bear witness to what we as evangelical Protestants believe about marriage and the gospel, especially in times in which marriage is culturally imperiled,” even though he noted that conference attendees will have “real and ongoing differences on soteriology and ecclesiology.” Moore, who added his voice to the criticism of the October Synod, maintained that he can “hardly criticize from across the Tiber and then refuse to talk, when invited, about these matters.”

“Here’s what I hope comes out of the meeting. I hope that this gathering of religious leaders can stand in solidarity on the common grace, creational mandate of marriage and family as necessary for human flourishing and social good,” Moore wrote. “I also hope that we can learn from one another about where these matters stand around the world. And I hope that those of us from the believers’ church tradition can represent well our views of how marriage is more than just a natural good (although it is never less than that), but is a picture of the gospel one-flesh union of Christ and his church.”