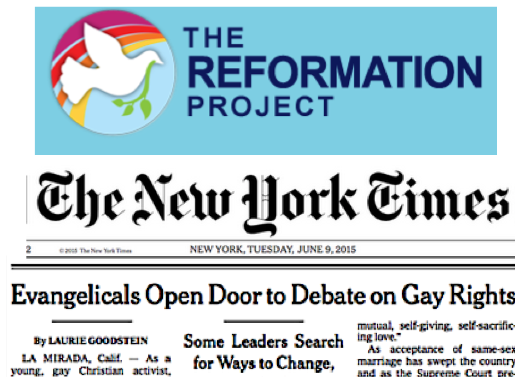 In his newsletter, Matthew Vines, author of God and the Gay Christian and founder of The Reformation Project (to reform biblically-based churches to accepting homosexuality and gay marriage), wrote this:

Pretty amazing news: Yesterday, evangelical leader Tony Campolo announced his support for “gay Christian couples” in the church, changing his position in a moving statement on his website after many years.
And then this morning, the work of The Reformation Project made the front page of the nation’s paper of record, The New York Times. The headline of the landmark article: “Evangelicals Open Door to Debate on Gay Rights.”

The work is far from over, but for a single day, that’s some remarkable momentum for this cause. Thank you to all of our allies, both old and new, and to our many dedicated co-laborers in this movement whose critical work continues make these kinds of breakthroughs possible.

In reading the New York Times piece, we see some interesting strategies from Vines. First, his meetings with Christian leaders are almost always private, one-on-one affairs. He has talked with small groups of pastors in Phoenix and Nashville and shared his story over coffee or lunch in places like Atlanta; Chicago; Orlando, Fla.; Portland, Ore.; and Greenville, S.C. If he can soften hearts and hard soil with his earnestness, his niceness, and his ability to make worldly reason sound so right, then he has gained a foothold.

He also visited the campus of Focus on the Family in February, and talked with more than 20 staff members about the psychic and spiritual damage inflicted on young gay Christians by ministries like Focus. Says the Times: “The organization kept the encounter quiet until now because it did not want to be perceived as wavering in its stance.”

You mean like compromising the truth of God’s Word? Having nothing to do with falsehood?

Another strategy: Vines knows he can’t win (yet) in the big arena of the Church. But he can do this:

The first step in changing churches would be to identify the “silent sympathizers” and encourage them to speak up.So in the meeting at Biola, Mr. Vines was on the lookout for just one silent sympathizer.

Not surprisingly, Vines found that man easily. Read the rest of the story here about how easily the folks at Biola opened the door just a little bit wider with this “brother in Christ.”

Also please read our White Paper on the Homosexual Agenda.