In an age when most self-proclaimed Christians are actually certifiable heretics (no really, check out the link – it’s not satire), where can we flee?  Is it possible to filter out the heresy, and create a safe space for Christians fleeing from the wolves that have infiltrated the visible Church?

Diana Lesperance over at The Narrow Way  says yes, and she has written Scattered Sheep and Little Lambs: The Case for a Separate Evangelical Identity, which I have republished with her permission, for consideration. 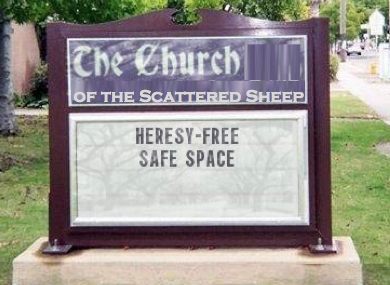 “I am a nobody. I don’t have a large ministry or platform. I am merely one of many nameless, faceless, little sheep who have been wandering in the evangelical wilderness for a long time.  I don’t have much money, or even the strength and enthusiasm of my youth anymore. I’m not worth much to the typical pastor. Even so, I have something to say. And I hope that my obscurity won’t be a cause for dismissing my concerns.

Just in case those who are in positions of leadership haven’t noticed–the sheep are scattered. Many in the flock have given up on shepherds completely, forming home churches, or even quitting church altogether. Many are fed via the internet. They long for fellowship and love, but for them, the churches have become battlegrounds, rather than sanctuaries.

This has caused some of the mature sheep to bleat loudly because they want to warn the flock, but it’s very bewildering to the little lambs who don’t understand why they can’t trust their shepherd. They don’t believe that the food or water they’re being fed is unhealthy or even poisonous. They feel love coming from the shepherd. Unfortunately, like a young, teenage girl, they aren’t able to discern between the language of true love and the language of seduction.

Because of this inability to discern, I believe that the pathway of truth needs to be made more clear . . . and I’m begging the good and faithful shepherds to provide well-lit trails of safety and refuge that the little flock can easily follow.

One day the hirelings will have to give an account to the Great Shepherd–whose heart’s desire was to gather his flock like a mother hen gathers her little chicks under her wings. Some of his last, precious words were those of a shepherd: “Feed my lambs . . . feed my sheep . . . feed my sheep.” He spoke this to Peter, who would later write to those who were to become elders:

Be shepherds of God’s flock that is under your care, watching over them—not because you must, but because you are willing, as God wants you to be; not pursuing dishonest gain, but eager to serve; not lording it over those entrusted to you, but being examples to the flock.  And when the Chief Shepherd appears, you will receive the crown of glory that will never fade away. (1 Peter 5:2-4)

If these pastors exist, I cannot seem to find them in my corner of the world. My husband and I often spend a year in a church before we discover the heart of the shepherds and leaders. Often times the doctrinal statements and sermons are sound, but the further we venture into the congregation, the more book studies, prayer methods, and false doctrines we uncover. We feel like Ezekiel who discovered “greater abominations” as he was led further into the temple (Ezekiel 8).

The evangelical church is more like a minefield than a green pasture. There are dangers everywhere. The church has been decimated by prosperity preachers who use the flock for “dishonest gain” (and actually worship mammon), false revivalists who bring in lying signs and wonders, and postmodern preachers who lead the flock away from trusting in the Word.

The latest trend is toward “Cathangelicalism,” a blend of Catholicism and evangelicalism. The worst part of this Cathangelical movement is that it is rooted in the writings of the “ancient” Catholic mystics . . . those who knew nothing about repenting from dead works and putting their faith in the finished work of the Cross.

Consider this gallery of horrors:

This is just  the tip of the iceberg. I could go on and on. And all of this compromise, idolatry, and corruption in the temple of the Lord has trickled down to the local church. It’s rampant!  How are the sheep (or the little lambs!) supposed to make their way through this mess?

Is it necessary for me to remind the church of those who gave their lives in the flames of the Inquisition in order to preserve the truth? Wycliffe, Huss, Luther, and Tyndale were courageous and stood fast against the false teachings of Catholicism. As Protestants they separated from the Roman Catholic Church and lit the way of truth for their generation. And now, are we just willing to forget their efforts and become a generation that allows Christianity to be plunged into another thousand years of darkness?

26 Responses to A Safe Space for Scattered Sheep?