The big buzzword in Christendom this summer is UNITY. You might be surprised at how many events are gathering millions worldwide and encouraging them to drop their doctrinal differences to hold hands for the cause.  Behind these Unity gatherings you’ll find Nick Hall and his Pulse Movement.

What is the Pulse Movement? It is the power behind the biggest Christian mixer events in the nation and world. Together 2016, The Gathering 2016,  Momentum Conference, The Reason, Younger Leaders Gathering, Unite National Day of Prayer.  All of these global gatherings have one mission: to talk about and get people used to the idea of Unity.

Pulse claims more than 150 large gatherings of Christians around the world under the Unity banner. Organizers say that every event is embedded in a strategic process and spearheaded by local partners who then carry the message on long after the event. Additionally, Hall has embedded Pulse into nearly all of the major Christian music festivals, which have signed on to start talking more about UNITY.

You might not have heard of The Pulse Movement; its founder Nick Hall wants to keep it that way:

“We’re not interested in making the PULSE name known; we want the name of Jesus to be known. Since PULSE’s founding, we have linked arms with hundreds of ministries and churches around the world to fuel evangelistic movements.”  – Nick Hall, founder of The Pulse

(There are plenty of conspiracy theories out there. This, coincidentally, is the International Year of Pulses, according to the United Nations.)

Who is Nick Hall? 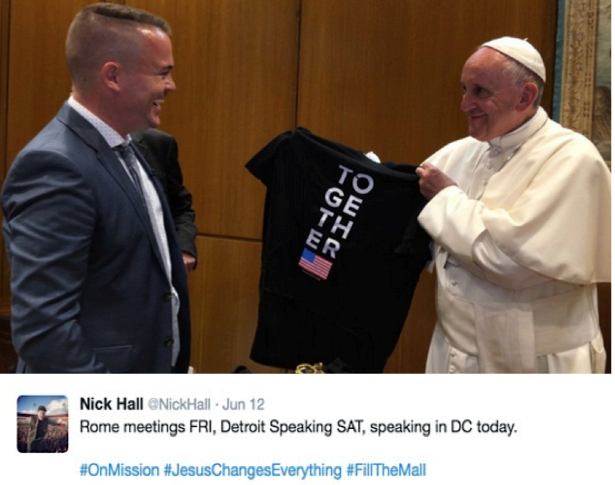 Until a few months ago, many of you had never heard of Nick Hall, until you saw photos of him with Pope Francis at the Vatican.  Hall invited the Pope to address the one million Christians gathered in Washington D. C. in a few days for Together 2016-Reset. The Pope agreed, and will be among the many “thought leaders” Hall has invited to influence attendees. Unfortunately, there are many celebrities who are leaders in false movements like the Word of Faith Prosperity and the NAR (New Apostolic Reformation) movements.  Read more here. 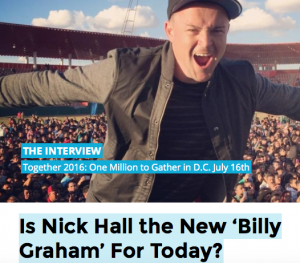 Hall was recently called “this generation’s Billy Graham” in a recent publication, in which Hall said Unity means laying aside our differences:

“We can find common ground. We can work together for the common good. Jesus is an example of leadership. Even Gandhi, together with so many famous dignitaries and leaders throughout history, looked to Jesus’ life as an example.”

Of additional concern is his membership and leading in some of the biggest global unity alliances in the world: At age 33, Hall sits on the leadership teams for the US Lausanne Committee for World Evangelization, a global ecumenical group partnered with the United Nations, and also the National Association of Evangelicals, a left-leaning group representing the progressive wing of Evangelical leadership. Hall also sits on the student advisory team for the Billy Graham Evangelistic Association (BGEA).

Since founding The Pulse, his vast array of partnerships has expanded exponentially. One thing is certain: No one – not even the Pope – has had more traction in his efforts to loosen biblical doctrine for unity than Nick Hall.

24 Responses to Who is Nick Hall?