There are 435 members of our U.S. Congress. Apparently 52 of them said the sinner’s prayer with (NAR) New Apostolic Reformation pastor Rodney Howard 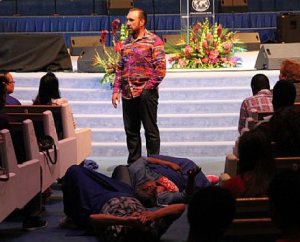 Browne, during the recent Celebrate America 2016 event in Washington, D.C. If you’re a numbers person, that’s roughly 12 percent of our U.S. Representatives who are reportedly “baby Christians.”

As a reminder, Browne’s version of spiritual awakening includes jerking, falling over and writhing on the ground, barking like a dog and laughing uncontrollably. Browne is famously known as the Holy Ghost Bartender for getting people “drunk in the spirit,” but it surely is not the Holy Spirit of God.  Browne is considered to be the father of the Holy Laughter phenomenon at the so-called Toronto Revival.

He is a prominent figure of the false Word of Faith Prosperity Gospel. and also the New Apostolic Reformation/Latter Rain Movement.

In reality, those who tout false prophecies, obscene bodily gyrations, and drunken behavior as gifts of the Holy Spirit are the ones blaspheming Him. In fact, no one is more notorious for that than Rodney Howard-Browne himself. For him to decry blasphemy and pretend to know anything about the fear of God is the very height of arrogant irony.

If you think that sounds unduly harsh, watch this video of a typical Rodney Howard-Browne “ministry” binge: