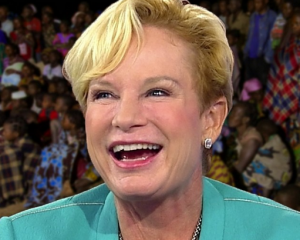 As the New Apostolic Reformation (NAR) rapidly grows, its anointed leaders seem to be distancing themselves from the NAR label. Especially now that discernment reporters are shining the light of Scripture on this movement and Christians are beginning to take notice – and question their pastors. One such reporter, Holly Pivek, co-author of A New Apostolic Reformation?: A Biblical Response to a Worldwide Movement, files this report over at Spirit of Error:

Recently I wrote about Bill Johnson’s attempt, in a Christianity Today cover story, to distance himself from the New Apostolic Reformation (NAR).

Now I address Heidi Baker’s denial—also reported in Christianity Today– that she’s part of the NAR. It appeared in a May 2012 cover story about Baker, titled “Miracles in Mozambique: How Mama Heidi Reaches the Abandoned.” The author, Tim Stafford, indicates that the reason people lump Heidi Baker and her husband, Rolland Baker, with the NAR is because of their association with the Toronto movement and loyalty to its leaders, many of whom are part of the NAR. But, unlike those leaders, Stafford writes “the Bakers do not promote the New Apostolic Reformation or consider themselves to be modern-day apostles.”

Contrary to what Stafford was told, Heidi Baker does claim to be a modern-day apostle and, thus, is part of the NAR. He must not have seen a video of her personal testimony–posted on YouTube in May 2011, a year before the article was published. If he did see it, he missed her claim to be an apostle. Though she does not directly state the words, “I am an apostle,” she clearly claims to be one. Anyone who understands the NAR and watches the video knows that’s exactly what she’s claiming. Watch it for yourself and see if you can spot the indicators.

A commission and a public affirmation

Here’s a brief recap of the portion of the video where she claims to be an apostle.

Starting in the video at about 6:16, Baker recounts the story of her appointment as an apostle, which occurred while attending a revival in Toronto led by the NAR apostle Randy Clark. After being miraculously healed of double pneumonia, she has a visionary experience when she sees Jesus, face to face, and receives a specific commission by him regarding her work with orphaned children in Mozambique.

Also while at Toronto, Clark–while speaking to the audience at large–suddenly publicly affirms her appointment as an apostle. He says, ““I have to change my message. I need to speak about the apostolic anointing.” (Those in the NAR know that to have an “apostolic anointing” is a NAR euphemism for being an apostle.) As Clark prophesies to her about her appointment, Baker is flipped on her head by God and she hears the Lord speak to her again about being an apostle. While Baker is still on her head, another senior leader of the Toronto revival, Ian Ross, asks her if he can pour water on her—a prophetic act and, apparently, a public symbol affirming her appointment as an apostle.

42 Responses to “Apostle” Heidi Baker distances herself from the NAR