Pulpit & Pen author Bud Alheim asks the question, and indeed it is one that needs to be answered: 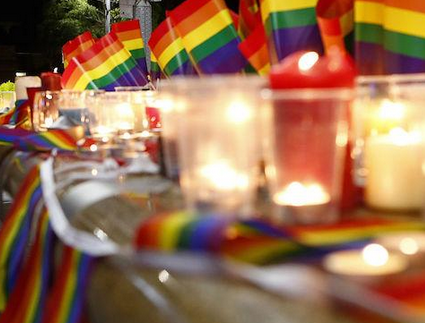 Early this Sunday morning, June 12, 49 people in a gay night club in Orlando, Florida were murdered. Over 50 more were injured in what is already being referred to as the most lethal massacre in American history. As with the loss of any life, in any place, we mourn for those who have died and pray for their families. We pray that through the horror of obvious sin and evil-inspired violence, the Gospel truth might be known. We know, that in the midst of even this, our God is sovereign and His Hand is at work.

The Scripturally-astute believer can hardly turn on the daily news, read a feed on social media, or pick up any newspaper and not immediately recognize the ongoing Romans 1 judgment of God. It’s evident across the globe. It’s evident across our nation. Today, it seems evident in Orlando.

Though the news about the shooter continues to pour forth, still merely hours from when his bloody act began, we do know this much – he was motivated by Islamic jihad. His associations with ISIS are being made known. His 911 call voicing support for ISIS kingpin Abu Bakr al-Baghdadi has been reported.  Indeed, ISIS has claimed responsibility for the massacre.

Which prompts me to wonder …

Why are Southern Baptists actively supporting the construction of an Islamic mosque, led as we are by the unilateral voice of Russell Moore and a seemingly unrestrained Ethics and Religious Liberty Commission?

Russell Moore hasn’t, as of this writing, publicly commented about the Islamic influence of the Orlando jihadist. He has called, as we all do, for prayers for the families of the victims and for those injured in the attack. But he has not acknowledged the evil-inspired reality that we, as Christians, absolutely know Islam to be.

Russell Moore may not address the Islamic evil that motivated this particular individual. He may muse that, well, most Muslims are not jihadists. But, again, as a Christian, he cannot fail to recognize that Islam worships a false god that will motivate its followers to perform such heinous acts.  Moore should believe, as do most Southern Baptists, that “we know that we are from God, and the whole world lies in the power of the evil one.”  (1 John 5:20)

Rather than denouncing Islam as inherently evil from his lofty ERLC perch, standing instead on the solid ground of the Gospel of Jesus Christ, so far Russell Moore has led this Southern Baptist agency to proactively support Muslims.  Instead of a bold, solitary stand on the Truth, Moore has opted to join hands with the very source of evil that inspired today’s events in Orlando.

Bethel Redding’s Courtship with Belial
Are we living in simulations indistinguishable from reality?

4 Responses to Jihadist Mass Murder In America; Will Russell Moore Continue To Ally The SBC With Evil?