Posted By Amy Spreeman on June 22, 2016 in Politics
Share

Uh-oh. Donald Trump has put together a team of advisors to help him win the Evangelical er, ecumenical vote.  All candidates and presidents have religious advisors (Jim Wallis for President Obama, Rick Warren for Marco Rubio; Bill Hybels for President Bill Clinton, presumably so they don’t say something to offend their voting base. (And you thought it was so that they’d get a healthy dose of biblical wisdom!) 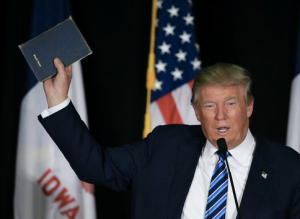 In any case, The Donald met with about 1,000 “conservative Christian leaders” today to make his announcement.Trump told the crowd: “You’re the most powerful group in the country, but you have to band together.”

Under glittering pink-and-white chandeliers, evangelicals and conservative Catholics filled the large ballroom, some raising their hands and closing their eyes as they sang, “Seek ye first the Kingdom of God/And his righteousness/And all these things shall be added unto you.” …The moderator, former Republican presidential hopeful and former Arkansas Gov. Mike Huckabee, told Trump this would not be an “inquisition,” but rather people had come because they want someone who will “lead this nation out of the abyss.”

We’ve reported on a number of these teachers in the past. Many are connected with the Dominionist New Apostolic Reformation.