In case you thought Rick Warren was fading into the background giving the New Apostolic Reformation the spotlight, think again. While the NAR “apostles” target youth ripe for revival, Warren is back in the saddle targeting pastors around the globe for his one-world P.E.A.C.E. Plan. 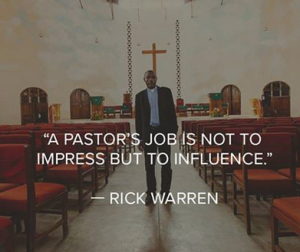 For the first time in almost a decade, Saddleback pastor Rick Warren is bringing back his Purpose Driven Conference for pastors and leaders, and inviting a worldwide audience to stream it online (for a mere $199). The conference takes place at his Lake Forest, California church on June 28 – 30.

In his official invitation, Warren reminded his audience:

“A pastor’s job is not to impress but to influence.”

But the question is, influence them to do what?

The Bible says a pastor’s job is neither to impress nor influence his congregation. His job is to preach the Gospel. True faith comes by hearing the Word of God:

I charge you in the presence of God and of Christ Jesus, who will judge the living and the dead, and in view of His appearing and His kingdom: Preach the word; be prepared in season and out of season; reprove, rebuke, and encourage with every form of patient instruction. For the time will come when men will not tolerate sound doctrine, but with itching ears they will gather around themselves teachers to suit their own desires. (2 Timothy 4:2)

That’s what the Bible says. Let’s take a few minutes to look at the event, what Warren says about it, and then some concerns about the pattern of influence he has had on the visible church.

In a promotional video, Warren says this is the most influential conference in existence, and that he has been teaching millions of pastors, leaders and congregants around the world to build processes and paradigms for growth. The key to keep growing is to be fast, fluid and flexible. 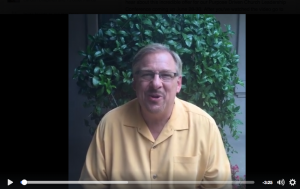 Of his conference, Warren says it is God’s mandate to bring the training back on American soil as part of his P.E.A.C.E. Plan:

“Now that the PEACE PLAN is mature and impacting millions of people around the world through thousands of churches, God has shifted my focus from church planting to church renewal, beginning in America.”

He explains that the Purpose Driven paradigm is like “the operating system for the church, but we have discovered so many new apps over the last ten years.”

Over the past several decades, there have been many red flags and concerns voiced by Christian leaders as to why Rick Warren’s activities, partnerships and teachings are a counterfeit of what the Bible teaches. Because there are so many, I’ve bulleted these so that you can read an do your research:

Finally, if you’ve ever wondered what the “big deal” is about the fruit of the Purpose Driven Church created by Peter Drucker and championed by Rick Warren, Bob Buford and Bill Hybels, you’ll want to check out the ultimate video titled, Church of Tares: Purpose Driven, Seeker-Sensitive, Church Growth & New World Order:

This must-watch video is several hours long and represents extensive research on the teachings, activities and partnerships of Rick Warren, and answers all the questions you may have from a sound biblical perspective:

“Can the Church borrow the marketing tools of the world and apply them to the Church? What is the history of the Church Growth movement and its false premises? Who is involved in the new evangelicalism and second reformation? Why are these movements embracing contemplative mysticism? How does this movement play into the New World Order?”

It’s an excellent film to watch with your small group, church leaders and family members.