Posted By Amy Spreeman on June 27, 2016 in Politics
Share

When James Dobson announced that a friend of his had led Donald Trump to “accept Christ,”  some questions niggled at my mind – in spite of the fact that I hope Trump is saved – for real. 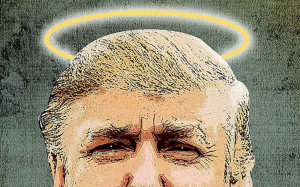 I mean, wouldn’t it be great if Donald Trump really did become a Bible-believing, repentant, Christ-following Christian? I would love to know that God’s Grace was lavished on this man who a year ago said he’s never sought forgiveness for his sins:

“People are so shocked when they find out I am Protestant. I am Presbyterian. And I go to church and I love God and I love my church,” he said.
Moderator Frank Luntz asked Trump whether he has ever asked God for forgiveness for his actions.
“I am not sure I have. I just go on and try to do a better job from there. I don’t think so,” he said. “I think if I do something wrong, I think, I just try and make it right. I don’t bring God into that picture. I don’t.”
Trump said that while he hasn’t asked God for forgiveness, he does participate in Holy Communion.
“When I drink my little wine — which is about the only wine I drink — and have my little cracker, I guess that is a form of asking for forgiveness, and I do that as often as possible because I feel cleansed,” he said. “I think in terms of ‘let’s go on and let’s make it right.'”

While I still hated Him, I played church as a false convert and said some pretty awful things too. But God…

Anyway, Trump’s conversion would surely be good news, but it seems that Dobson has stirred up more questions that have caused many to hold back their celebration. While I wouldn’t judge a man’s salvation, It seems Dobson is excited to do so, making the following comments in an interview with Pennsylvania megachurch pastor Michael Anthony following that meeting in New York:

“I know the person who led [Trump] to Christ. And that’s fairly recent. I don’t know when it was, but it has not been long.”

What person? Was it this year? This month? How did that go down? What are we to make of this third-person report? Why the secret wink-wink, nudge-nudge? Could this person simply be a tale-teller? Why does this sound like borderline gossip?

“I believe he really made a commitment, but he’s a baby Christian.”

Okay, I know that a so-called baby Christian is at the very beginning of his or her sanctification process, but is anyone discipling Donald? And what do you mean by “made a commitment”? Trump has made many commitments that didn’t quite work out. Why do you believe Trump’s commitment equals salvation? And why do you need Evangelicals to believe that? Furthermore, why isn’t Trump announcing this himself? Why didn’t he say something to the pastors gathered?

“He used the word ‘hell’ four or five times. He doesn’t know our language. He refers a lot to religion and not much to faith and belief.”

Shouldn’t that be a little red flag that Mr. Trump doesn’t have the spiritual eyes of a converted Christian? Not that he has to know Christianese, but that one would think he would understand basic concepts of repentance, being washed clean, faith, belief… You know…concepts that even baby Christians know when their eyes are first opened.

“You got to cut him some slack. He didn’t grow up like we did.”

Who is “we?” I didn’t grow up like you did either. Actually, I will cut Trump some slack, as he may be a baby believer or still in spiritual blindness. However, shouldn’t Evangelical leaders and Christian reporters be held to a higher standard? If Donald Trump were not running as the Republican candidate, would any of these pastors have taken the time to fly to his side?  Would they do the same for Hilary if she asked them to?