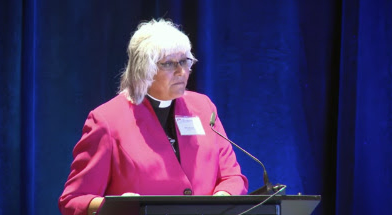 She says she is “worthy” and “deserving.”

She’s a he.
He’s transgendered (calls himself She).
He’s about to be ordained in the “Lutheran” “Church” (both in bunny ears)
He says he is worthy and deserving to be baptized, and worthy of the promises of God.
Unfortunately, God promises wrath to those who do not repent of their sin and believe on Jesus, who washes all sin clean by His shed blood.

The Reformation Project’s Matthew Vines is sharing this man’s testimony and speech from the RP’s recent Kansas City conference: Nicole Garcia lit up the room with a fiery, heartfelt, and theologically grounded keynote address on our opening night,” says Vines, who launched a campaign to get all churches (especially the theologically grounded ones) to stop calling homosexuality a sin and to embrace gay members and gay marriage. (See our White Paper on the Homosexual Agenda.)

Here is a snippet of the speech, which you can watch on YouTube in its entirety:

Is it any wonder that I identify with this story? A person of color. A person who is not of the dominant culture. A person who does not fit into the gender binary systems. I really see the world through the eyes of the Ethiopian eunuch. For I, too, believe that Christ Jesus suffered, died, and rose from the dead in order that I may have eternal life in his kingdom—that I am worthy of baptism, I am worthy of the promises of God. I have been recreated, justified, and sanctified by the Holy Spirit.

One Response to Are unrepentant sinners worthy to be baptized?