Posted By Marsha West on May 25, 2015 in New Apostolic Reformation (NAR)
Share

John Lanagan alerts us to yet another NAR false prophetess, this time Lana Vawser, who has supposedly uttered a prophetic word form God…..that He never spoke.  God speaks to us through His Word, not through pretend prophets. 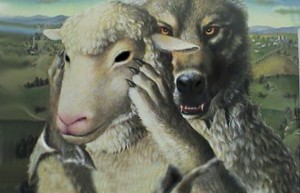 The New Apostolic Reformation is not an organization. These are networks of “apostles” and “prophets” who believe the Second Apostolic Age is here. This means the age of denominations has passed and it is these “anointed” apostles and prophets who are to govern the church.

From the NAR we have such luminaries as C. Peter Wagner, James Goll, Mike Bickle, Bill Johnson, Mark Chironna, Brian Simmons, Cindy Jacobs, and many others.

These people are Dominionists–they believe Christ cannot or will not come back until Christians have taken control of the earth.

Cindy Jacobs actually told a rapt congregation that the Lord’s Prayer is really about Dominionism. [1]

Now, just as “God” showed Cindy Jacobs the Lord’s Prayer is about Dominionism, Lana Vawser, another false prophet, is claiming God told her this:

“Suddenly I heard the words ‘Seven mountains of culture’ (media, education, arts, religion, business, government, family). ‘I want to release My people into these seven mountains to bring LIFE to these mountains and see My nation TURNED AROUND, but My people must be in position.’” [2]

The Seven  Mountain mandate is an NAR construct.

But “God” had more words for Lana Vawser:

“I am calling My people to come before Me and to ask Me what part they have to play in the seven mountains of culture.For I am releasing My people that are positioned in great acceleration into these mountains in the United States to bring about a demonstration of MY GLORY STORY! My STORY of reconciliation, of repentance, of restitution, of restoration, of rebuilding, of healing.

“I am releasing specific Kingdom keys right now into the hearts of My people with specific insight into how I will use them in this nation to bring about great change. It is NOT over. The story has not reached the end. I want to do something new, something glorious, but My people must enquire of Me and not abort that which I want to release. My people must continue to cry out.” (emphasis Vawser’s and “God’s”) [3]

It is apparent the NAR recently made great progress in terms of exposure and influence in the Assemblies of God denomination through the Empowered21 organization’s recent Jerusalem gathering. [4]

Non-Pentecostal Christians should not be casual about the NAR, because this movement may well enter the unlikeliest of churches and denominations through politics and other means. [5]

2. Lana Vawser, United States, You are Pregnant with a Glory Story and Destiny Gates are Opening, Elijah List Newsletter, 5/25/15

DOWN OUR WHITE PAPER ON THE NEW APOSTOLIC REFORMATION/DOMINIONISM