Brian Houston’s hearings before the Royal Commission into Institutional Responses to Child Sexual Abuse are underway, as Houston faces questions about the safety of his Hillsong empire after the original charge: that Houston failed to tell police his father was a child sex abuser.

“Frank Houston had abused up to nine boys in Australia and New Zealand, and in its final report on the case released on Monday, the commission found multiple failings within the church executive – at the time led by Frank Houston’s son Brian – in responding.   Source

“After the allegations became public within the church during 1999, Frank Houston met his victim offering him $10,000 and saying: “I want your forgiveness for this. I don’t want to die and have to face God with this on my head,” the commission heard.

Months later, when the money had not arrived, his victim called Frank Houston’s son Brian, who was then the national president of the Assemblies of God in Australia Pentecostal movement.

The victim said Brian told him: “You know, it’s your fault all this happened. You tempted my father”.

“Brian got very angry after that. He slammed the phone down after saying words to the effect of ‘You’ll be getting your money’,” the victim told the commission. He received a cheque for $10,000 about two weeks later.  (CLICK IMAGE BELOW FOR FULL REPORT) 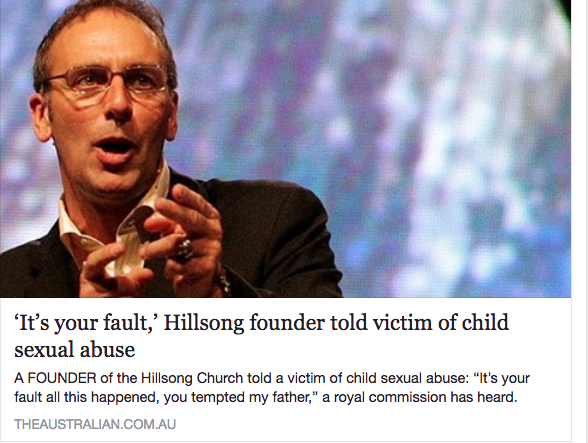 Is Hillsong going to be compliant to make sure these things don’t happen in the future?  Last week Hillsong’s popular senior pastor appeared a second time before the child sex abuse royal commission along with the head of Australia’s largest Pentecostal movement, Australian Christian Churches national president Wayne Alcorn.

According to news reports, the abuse has been ongoing over years since the first reported incident involving a young boy in 1969 and 1970. The report says Frank Houston admitted sexually abusing the boy on one occasion and never preached again.

The national executive allowed the elder Houston to publicly resign, without damage to his reputation or that of Hillsong Church, the royal commission said.

“After the organisation learned of allegations that Frank Houston had abused six boys in New Zealand three decades earlier, Assemblies of God ministers were told in late 2000 that he had admitted to a ‘serious moral failure’ and Brian Houston had suspended his father’s credentials.

Hillsong Church has said the abuse occurred many years before its establishment and Brian Houston took immediate action to expose and stop a child abuser.

Brian Houston did an interview in February admitting that he knew about the abuse but did not speak up.

In a related article on a completely different sex abuse case, Fighting for the Faith’s Chris Rosebrough interviewed the mother of a church sexual abuse victim in her C3 Church (not Hillsong), and it is a stunning testimony of what happened when she tried to ask Brian Houston for help. Do not listen to this without tissues. Click here,