“I felt something push me down.  I stumbled up the stairs but kept falling.  It must have been the Spirit manifesting itself, I thought.  As I sat on my bed, I kept keeling over and twitching.  My brother and mother thought it was great.  In fact, my brother even videotaped it.”

Macie has allowed me to include her story in this series about a movement called the New Apostolic Reformation, or NAR for short. In this series, I want to take readers beyond the textbook What is the New Apostolic Reformation Movement explanation, into the personal experiences from those who have been there, and what happened when God opened their eyes to the truth.

Here is Macie’s story I her own words: 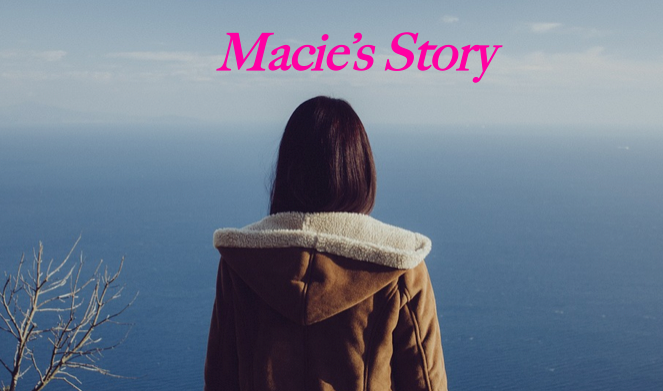 I was told that I “asked Jesus into my heart” as a 5-year-old.  It always bothered me that I could not remember this.  It seemed that we were seeing people have dramatic conversions, but mine wasn’t.  I don’t remember Scripture being used or the full Gospel in this conversion – so I kept asking Jesus into my heart over the years.

I grew up going to a small Assemblies of God church with my mom and siblings.  I remember singing hymns, Sunday school, and the Christmas pageant.  The church later broke apart, and we ended up at a home church for a short season.  From there, it was on to a Christian and Missionary Alliance church for several years.  I remember sermon outlines with topical but Scriptural messages, and leadership-written songs for worship.

At one point, my mom was involved in a small group.  I remember coming home one time in the middle of the day and people were laying (seemingly unconscious) on the tiled kitchen floor.  I just went up to my room.  One morning, I heard my mom laughing “in the Spirit” in the shower below my bedroom.  It went on for probably an hour.  I remember feeling irritated over this. Could she just stop already?

There was a prophet that my mom’s best friend heard of from California (John Paul Jackson), who would give prophecies.  I went to a seminar one evening at a Vineyard Church in MA.  I remember a girl of about ten who was speaking in tongues and prophesying.  Then, the prophet spoke and began calling people out.  I wanted an experience, but I wasn’t called out.  I remember wanting this evening to end, but wondering if I should feel guilty for that since the Spirit was obviously moving.  I also couldn’t leave because my mom was passed out on the floor “shivering.” We also went to hear this same prophet at the Christian College I later attended.

Around high school in the late 90’s, my aunt’s church had also broken apart, but some of the congregants had heard of the Brownsville Revival from Florida.  Apparently the spirit continued to move from there and people started making pilgrimages to Brownsville to get some revival. My mother, who had previously participated in prayer times with others who cast out demons, and who said she saw a woman whose leg actually grew, started attending their night services.  People would give prophecy after prophecy, and share their experiences and visions.  The music went on and on and was replicated from Brownsville.   It seemed that if they did just what they did in Florida, the Spirit would descend.  I don’t remember much else because the experience was what I craved.

Once, a guest prophet came and had a word for me.  I clung to that word, which said I was the apple of God’s eye. I believed that my dreams were saying something, and I would write down “words” that I believed I received, and cling to them.  I would place them as more important than God’s Word in that I would search the Bible to find phrases that might have been in my word.  I would then search for the meaning in that, never doubting that this wasn’t the Lord speaking to me.  One evening while driving home from my boyfriend’s house, I even saw a demon.

Then, one night in the summer, I had the experience I’d been waiting for.  I had attended a service where I believed I was opening myself up to whatever God wanted to do with me. On my way home, I stopped to get gas.  I distinctly smelled the scent of cinnamon.  I believed that’s how the Spirit of God must smell.  It was delightful.  Then, upon walking into my home, I felt something push me down.  I stumbled up the stairs but kept falling.  It must have been the Spirit manifesting itself, I thought.  As I sat on my bed, I kept keeling over and twitching.  This commotion was noticed by my brother and mother, who thought it was great.  In fact, my brother even videotaped it.

A few weeks later, while at one of these services, someone believed something had a hold on me.  They were so sure, that about four men and women from the church brought me into a room and kept trying to pray about this thing that had a hold on me.  Meanwhile, my boyfriend, whom I had brought, was in the other room, very confused.  I kept trying to release whatever this thing was (I had no idea).  What unconfessed sin did I have?

A few months later, I attended another service on my own that was at the Vineyard Church where I had seen John Paul Jackson speak a couple of years before.  This day there were three of his fellow prophets from California visiting.  They called me out for a word (there was no sermon or Bible opened), telling me that God wanted me to know that I was not alone (I had often struggled with loneliness).  Again, I held on to this word, but was not hiding God’s Word in my heart.

Over time, my boyfriend (who is my husband now) and I attended the Creation Festival and Soul Fest for several years in New England where a new thing seemed to be happening in worship music.  We took an instant liking to Delirious and Darryl Evans.  The Spirit was really moving in this music!  We were told we were the “Revival Generation” (I still wonder what happened to us.  Where was that revival?)

After my husband and I married, we moved and were involved in a church for almost a decade that rarely opened the Bible.  The emphasis was more on social justice and often emphasized ‘faith communities.’  During these years, my husband would listen to solid sermon podcasts from Voddie Baucham and often pass them on to me to listen to.  I think we were hungering for God’s Word but didn’t fully know it.

As time went on at this local church, there were a few close friends trying to start an Acts 29 church (so the Spirit could move), so we attended their small ‘gatherings,’ and were planning to join with them in partnership.  We could then finally sing Hillsong music and Jesus Culture songs, and I could be with others who were with me on this deeper spiritual level!

There would be times during worship where we would just ‘be,’ and wait for a word from God.

Well, one time, I caught wind of a few pastors on YouTube talking about the dangers of Jesus Culture. This began a true awakening in my husband and I.  The droning, sensual music, the lack of God’s Word in services, never hearing the Gospel, began to wake us up.  We were frantically researching left and right everything that we had exposed and opened ourselves up to.  Was this right?  Was it really the Holy Spirit?  Was it Biblical?  I was faced with the question: Is the Gospel enough?  I had addressed my sinful behavior, but not my sinful heart.  I had the Gospel as a very small side dish, but never the main course.  What was it anyway?  Did I know that I needed it?

True conviction was brought through God’s Word.  We approached our friends with this information – urging them to look into the leaders they were so closely following and relying on, like Mark Driscoll.  We lost these friends. I was told I needed to get my theology straight.  That was true, and I have.  My husband and I unanimously left the church plant (which is now a Vineyard Church), and soon after, the church we had been in for a decade (no one ever asked us why we left and where we went).  We are now involved in a lovely small, encouraging, Bible believing, expository preaching, hymns only church.  I can’t even bear to hear all those songs I used to fill my mind with.

My family and I also seem to speaking a different language now – though several of them are professing Christians.  It is both frustrating and heartbreaking.  I don’t understand why we can’t all rejoice in the Gospel of Jesus Christ and saturate ourselves with the full counsel of God’s Word.  I have had to repent for receiving counterfeits of the Spirit and for other idols I was worshiping.  But… God is so merciful!

I can’t even begin to express my thankfulness for how patient and faithful he is.   I now have assurance of salvation (Eph. 2:8).  I know true peace that comes from Him that I never had before. Glory be to God for extending his magnificent grace to me and leading me to be holy set apart unto Him.

I keep praying for my family especially.  I think they think I believe that I think I am better than them and that they are being judged.  I truly just want to show them the dangers of the false teachings, teachers and maybe even assurances of salvation that aren’t in line with God’s Word.  I want to snatch them from the fire before it’s too late.  I long to rejoice in the wonder that Jesus would die for us.  He is a great God and deserves all our praise as we worship in Spirit and in truth!

Pastors, don’t be a jerk. Be a shepherd.
Who are Family Research Council’s “Watchmen on the Wall”?