Posted By Amy Spreeman on November 11, 2015 in Homosexual Agenda, In the News
Share 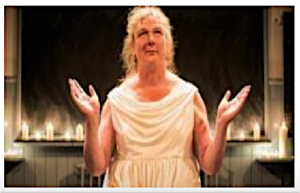 Oh, look: A play depicting Jesus Christ as a transgender woman is on stage in Ireland.

“The Gospel According to Jesus Queen of Heaven” is going to be performed this Sunday, Nov. 15 at the Outburst Queer Arts Festival in Belfast. The play’s creator, a transgender, plans to use God’s own breathed-out Word to justify this.
Folks, our Lord died for this sin. I do pray for repentance,  that He would open their eyes to the truth of their disposition, before it is too late:

The play imagines a transgender Jesus coming back to the world today,” Jo Clifford told BBC News. “She pitches a sermon and tells a few very familiar Gospel stories. Obviously being a transgender woman myself it concerns me very greatly that religious people so often use Christianity as a weapon to attack us and justify the prejudices against us. I wanted to see if we could move away from that and make people think again.

“She has a communion, shares bread and wine with the audience, which is really a gesture of solidarity in the face of death, and she gives a blessing,” Clifford added.

“The Gospel According to Jesus Queen of Heaven” caused protests when it was staged in 2009, with close to 300 protesters rallying in opposition by candlelight outside a theater in Glasgow, Scotland. The demonstrators sang hymns and carried placards with messages reading: “Jesus, King of Kings, Not Queen of Heaven” and “God: My Son Is Not A Pervert.”

Wisconsin Church Event: “Raising a Jedi: Spiritual Formation and the Force”
Leaving Lysa: Why You Shouldn’t Be Following Lysa TerKeurst or Proverbs 31 Ministries