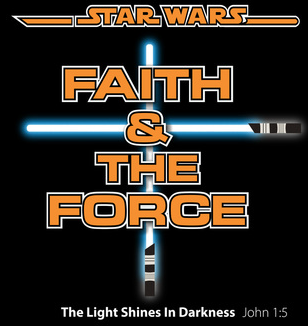 The church advertisement quotes John 1:5, with the tagline, “Faith & The Force: A Light Shines in the Darkness.”

That verse is supposed to be about Jesus. But here we see a church using it to describe a mystical power from the Star Wars blockbuster franchise.

But is this “Force” in the Star Wars films in any way like biblical Christianity? Or is The Force (although imaginary), based on a New Age, Pantheistic, Eastern-based idea prevalent in Buddhism? Could The Force be a clever counterfeit, like an angel of light?

A Wisconsin church is hoping to use the idea of The Force along with fun costumes to draw atheists into its sanctuary theater by hosting an event designed to explore Spiritual Formation, The “Force” and how to raise a Jedi.

Glaringly missing from the entire event lineup is any mention of Jesus Christ, repentance, salvation, grace, the cross, the Bible, or anything remotely resembling scriptural faith.

One of the breakout sessions is a self-guided walk the Labyrinth to “quiet your mind and access the Force.”  “All Jedis must learn to look inside,” says the church, First United Presbyterian Church in De Pere, Wis., about 15 minutes from my house.

Obviously this is geared toward Star Wars fans ahead of the next rendition of the movie blockbuster next month. It’s also geared toward those who do not know Christ; who have not been regenerated by the Holy Spirit and who can not discern spiritual things.

Let’s stop a moment and consider these terms used in the marketing:

Spiritual Formation:  the church growth movement teaching of “many practices that opens [the believer] to the presence and direction of God, and nurtured the character traits of Christ into fruition.” Source: White Papers on Spiritual Formation, and New Age

The Force (Star Wars): an energy field created by all living things. “It surrounds us and penetrates us; it binds the galaxy together.”

Jedi: a member of the mystical knightly order in the Star Wars films, with supernatural powers channeled via “the force”, trained to guard peace and justice in the universe.

Prayer Labyrinth: Historically, labyrinths were rooted in paganism and incorporated by Catholicism. Now they are promoted by the Emergent Church and others who seek an open spirituality apart from the Bible. Paul’s warning to the church should suffice to keep us focused on Jesus and avoid empty ritual: “See to it that no one takes you captive through hollow and deceptive philosophy, which depends on human tradition and the basic principles of this world rather than on Christ” (Colossians 2:8). Source

Selling The Force as anything similar to Christianity should be concerning to parents sending their children to the event:

Suggestively, the Force is portrayed in quasi­-pantheistic terms as ‘an energy-field created by all living things’ that ‘surrounds us and penetrates us’ (Obi-Wan to Luke, ANH). By the time of The Phantom Menace (1999), the first of the ‘prequels’, this pantheistic imagery is conveyed in quasi-­biomechanical terms – what many critics complain of as ‘bio-babble’ – in Jedi Master Qui-Gon Jinn’s teaching to the youngster Anakin Skywalker about the composition of The Force: ‘Midi-chlorians are a microscopic life-form that reside within all living cells … inside your cells … And we are symbionts with them.’   source

Here is the church movie trailer for the event:

We are connected to others in more ways than we can measure. We follow a tempo of life set by the rhythm of nature. That presence is called ‘The Force’ in the ‘Star War’ stories.  Spiritual traditions and modern neurobiology acknowledge its power. We will look at the practice of meditation and its personal benefits in this spirit filled exercise.

“Some of our older (church) members are very anxious to come because they don’t have a clue what this is, and they just want to figure out what we’re talking about,” event coordinator Dawn Picard says.

The older wise and discerning members are anxious? I’ll bet they are. And for good reason. Take a look at these workshops and discussions to see if any of this lines up with Scripture: 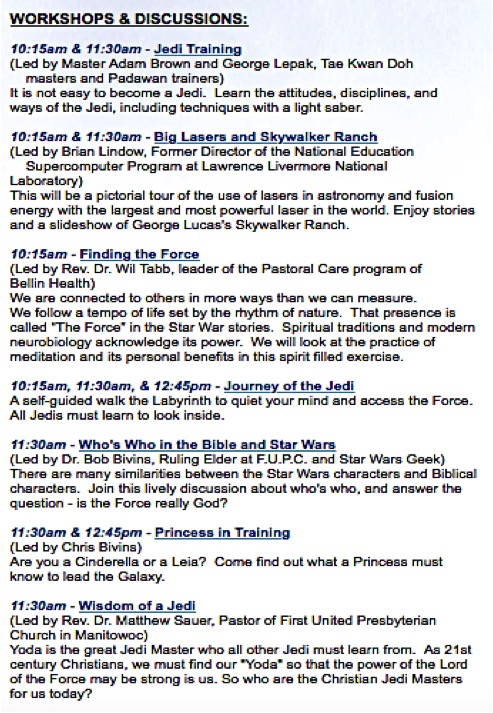 2 Responses to Wisconsin Church Event: “Raising a Jedi: Spiritual Formation and the Force”