For those who haven’t heard this before, Christian celeb Joyce Meyer is a false teacher. In 2011 Fran Sankey of Tower of Truth Ministries and host of Test All Things radio broadcast discussed Mrs. Meyer’s unbiblical and problematic teaching on her program. We’re posting the transcript, which is well worth the read for anyone who is in the dark about this woman. To listen to the show, scroll down to the end for the link. Sankey begins with some background on Mrs. Meyer and then fills us in on the reasons that some of her teaching is considered heretical. You don’t have to take Sankey’s word for it. Listen to the sound clips of Joyce Meyer she has provided. 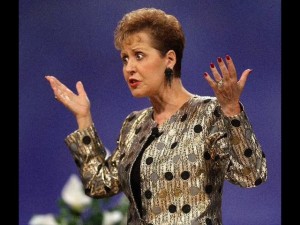 [Meyer] is a very popular author, conference speaker and Bible teacher based in the Saint Louis area. Meyer has a multimillion dollar ministry called Joyce Meyer Ministries and can be found on the net at www.joycemeyer.org. She also has an extremely popular TV and Radio programme called Enjoying Everyday Life which can be seen and heard on hundreds and hundreds of Radio and TV stations nationally and worldwide. Meyer teaches on some very practical issues making her well received such as forgiveness, dealing with a busy life, emotional healing, anxiety, addictions and self-discipline. She is especially loved by tens of thousands of women who hold her teachings up as being life changing. Joyce Meyer gained even more prominence when she made it to the cover story of Time Magazine in February of 2005 as one in the list of 25 most influential Evangelicals in America and by the way she is also in the September 18th 2006 issue of Time Magazine and she has also been on the cover of Charisma Magazine.

Well as popular as Joyce Meyer is this certainly doesn’t mean her teaching shouldn’t be held up under the light of the scriptures. We are commanded to test all things, examine the prophets, rightly divide the Word of truth and test the Spirits for not all come from God. As always I will be testing the teaching of Joyce Meyer and not judging her relationship with God. Only God knows if she has been born again by the Spirit. Only he knows what is in her heart and if she has truly repented and trusted in Jesus Christ for the forgiveness of her sins.

(audio clip) Joyce Meyer, “The Devil thought he had it, the devil thought he had won. Oh they were having the biggest party that has ever been had. They had my Jesus on the floor and they were standing on his back jumping up and down laughing and he had become sin. Don’t you think that God was pacing wanting to put a stop to what was going on. All the hosts of hell were up on him, up on him, up on him. The angels are in agony, all the creation is groaning. All the hosts of hell was up on him, up on him, they got on him. They got him down in the floor and got on him and they were laughing and mocking, “haha you trusted God and look where you ended up. You thought he would save you and get you off that cross – he didn’t haha.”

Just in case you doubt Joyce right now she wrote in her above mentioned, quote, “There is no hope of anyone going to heaven unless they believe this truth I am presenting. You cannot go to heaven unless you believe with all your heart that Jesus took your place in hell.” Continue reading

Read our White Paper on the Word of Faith movement

First, what does the Bible say?

It is necessary that we Christians use biblical discernment when supporting any preacher and teacher of the gospel.  It is irrelevant whether or not we like the person, think the person is a good speaker, or if the person says things that are uplifting.  Instead, we must be as noble as the Bereans.

If the Bible says that even Paul was checked by scripture, and that we are not to exceed scripture’s teaching, then aren’t we obligated to judge what Mrs. Meyer says against the word of God?  Of course we are.  It is not enough to just believe what she says, no matter how good the words are or how well she presents them.  Let’s not be taken in by a public figure who is confident, assertive, and appears to be biblical.  Our duties as Christians include biblical discernment – which can only be done by examining what she says and comparing it with Scripture.

What does Joyce Meyer teach?

From the Christian Apologetics and Research Ministry (CARM) site:

“For the most part, Joyce Meyer preaches a positive, biblical message that is of great value to many people.  We applaud her desire to be biblical, to point women to godly submission and humility, to trusting God, being loving, to have value based on what Christ has done for us, etc.  These are all good.  However, there are some very significant errors that we need to address.  Some of them are so bad that she is outside of biblical orthodoxy and must be considered a false teacher.  Let’s take a look at what Joyce Meyer has said.

Following is a list of quotes from Joyce Meyer, along with responses.

Joyce Meyer is a preacher

As unpopular as it might be to say, Joyce Meyer is wrong for occupying the position of a preacher of God’s word.  Not only does she preach false doctrines, but she also functions as a preacher by teaching God’s word, exegeting it, applying it, and telling people what to believe – in public.  She is out of place for doing this.  She speaks as a minister of the gospel teaching with authority.  She needs to stop.  If you doubt this, and if you also believe the word of God, then please see the article Should women be pastors and elders?