Posted By Amy Spreeman on January 21, 2016 in Women and the Church
Share

It’s no surprise to me that last week’s book review post, “7: An Experimental Mutiny Against Excess” by Jen Hatmaker, received a mixed response. Along with the many women who thanked me for posting the review, a number were also upset that I would dare to question anything about this popular speaker and teacher. Let me clear up one thing: the review was a warning not against the woman, but about how she is handling God’s Word to an international audience.

In addition to her numerous books (often used as “Bible” studies in women’s ministries), Jen Hatmaker is known for her presentations at a women’s gathering called “IF”, which I’ve warned about in the past.

Like Beth Moore, Jen Hatmaker is a speaker and author from Texas. And like Moore, she also is smart, quick, funny, and has a down-home way of speaking and addressing her followers. Hatmaker is a regular speaker with the popular IF:Gathering women’s conference that is simulcast in thousands of churches annually. 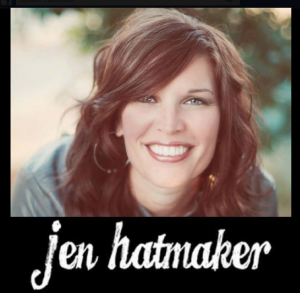 I view Jen Hatmaker as the “heir apparent” to Beth Moore’s mantle. Hatmaker has made a career out of her charismatic personality, and her ability to garner followers through social media. This (the social media aspect) is something of a new phenomenon: popular bloggers (like Hatmaker) can post something to social media, and have literally hundreds of thousands of people see it in just a few minutes. Contrast this to even the most prolific writers of centuries past (Spurgeon, Calvin, Luther, etc.). These men’s writings are still available today, but during their lives, they did not write things, or have them interacted with, in such an immediate way. With such immediacy, I fear, comes an unwise elevating of personality (“I am of Paul, I am of Apollos” 1Cor 3:4), and an unwise vetting of one’s own words (“Do not be quick with your mouth, do not be hasty in your heart to utter anything before God. God is in heaven and you are on earth, so let your words be few” Ecc 5:2).

In general, my chief concerns about Hatmaker are (1) her emphasis on flaws/failures, (2) her waffling on God’s word where it has spoken authoritatively, (3) her unabashed love for the Roman Catholic pope, and (4) her contribution to a works-righteous piety. 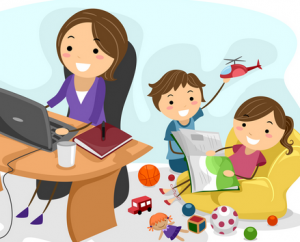 Hatmaker is one of the new brand of self-styled young Christian bloggers that I have a term for: the “messy transparents.” I don’t mean this in a condescending way; I simply mean it to reflect what I see as a growing trend among Christian women bloggers to discuss their lives (there’s the transparent part) over and over as being “messy” and “complicated.” They seem to connect to other women emotionally by highlighting their own flaws and failures.

Yes, the ongoing struggle with sin is real and daily. But for myself, I desire to be with other Christian women whose lives are ordered and God-honoring. There’s a fine line there. We don’t want to shame younger women who may be struggling with getting their lives in order. We need to encourage those women. And if we ourselves are *those* women, we need to seek help with that from Christian friends whose lives are in order, and work toward getting our lives in order, which comes from honest self-reflection before the Lord, Bible study, and seeking to walk in the truths of scripture of what a Christian woman’s life should look like. Obviously, none of us will ever do that perfectly! But neither should we be taking in a daily diet of articles from women bloggers who put the messiness, flaws and failures of their own lives on display on a consistent, ongoing basis.

This was most apparent to me in her March 2014 article about homosexuality in which she proclaimed her *personal* support of Biblically-defined marriage, but also claimed that there is no Christian consensus on the issue of homosexuality and same-sex marriage. She also characterized those who would hold strongly to the Biblical definition of marriage as engaging in a form of “theological bullying.”

(3) Her unabashed love for the Pope. 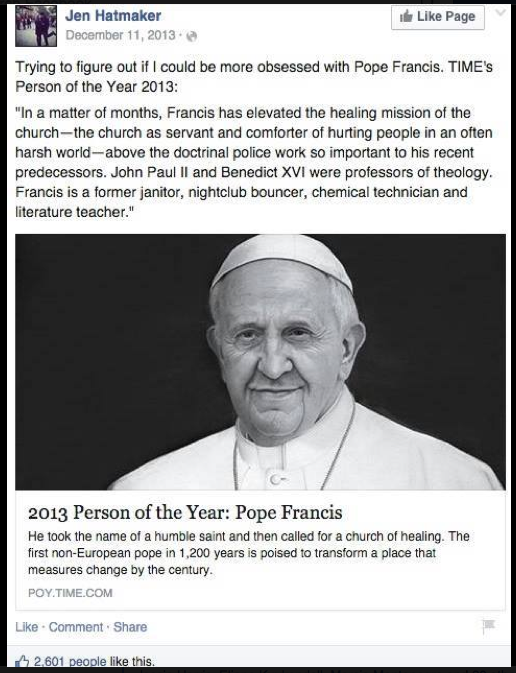 That is evidenced in the attached screenshots, never renounced or repented of, that are attached. Hatmaker also has a quote from Mother Teresa prominently displayed on the opening page of her personal website. The quote itself is not wrong, but it is not wise to point other Christian women to any Catholic leader as an example of Christ-likness. Christ is our head, He is our model. To say nothing of the fact that the Roman Catholic church is an apostate counterfeit of the true Church.

(4) Her contribution to a works-righteous piety.

Hatmaker, along with her fellow IF:Gathering speakers, participates regularly in conferences that present a form of piety that is strongly attached to doing good deeds, but is separated from good works as being a natural outworking of a Christian growing in the truth of God’s word, being convicted and changed by it, becoming more and more conformed to the image of Christ, and seeking to walk in newness of life, and in light of these truths.

There is a lot of “compassion on display” at the IF:Gathering conferences, with their good deeds set before the world to love and admire (“Be careful not to practice your righteousness in front of others to be seen by them. If you do, you will have no reward from your Father in heaven.” Matt 6:1).

* Update from Berean Research: While we believe the above article is factually correct and attributed correctly, we can no longer recommend this author as a biblically sound source for any Christian information.

Liberty University Welcomes Reality Show “Pastor” and Collaborator With “I Am a God” Rapper Kanye West
Part 2 Review: “7: An Experimental Mutiny Against Excess”