Posted By Amy Spreeman on July 2, 2015 in Discernment
Share 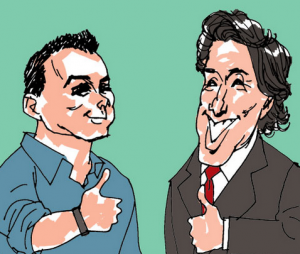 “At the end of the day we’re all on the same side,” says Hillsong celeb Brian Houston of Mark Driscoll’s sudden attack of conscience.  Speaking at the Hillsong conference, Mark Driscoll repented for a number of things. Praise God. Hallelujah.

No. Driscoll didn’t repent for any of that stuff. Driscoll repented for having criticized Joel Osteen.

Yep. You read that right. Fast-forward to about 20 minutes, 40 seconds to hear it.

Driscoll used the opportunity to publicly apologize for having ever criticized Osteen, and claimed to have asked Osteen permission to send him a private letter of apology. Houston, of course agrees, and says “…at the end of the day, we’re all on the same side.”

We agree. Osteen and Driscoll and Houston are definitely on the same side.

The US Supreme Court “gay marriage” ruling – how we got to this, and what do we do now?
Open the polygamous gates: Montana man files for marriage license to second wife, cites #SCOTUS same-sex ruling