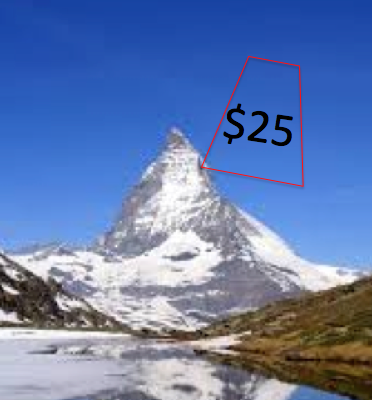 How much would you pay to take over the government for Christ?  Or to take over education, or media, or other sphere’s of influence?  If you believe that Christians are mandated to take over the world’s seven influential powerbases so that Jesus can come back, then here’s your chance to buy a mountain for only $25.

An upcoming Wisconsin event is making this offer as a way to fulfill its 7 Mountain Mandate and fund its speaking series that kicks off this Sunday and runs through May. The speaker lineup includes a “gifted seer of the prophetic,” a Green Bay “Packers Today” television show hostess, and the former lead guitar player for the rock group Skillet.

The invitation is from 3:20 Ministries of Milwaukee, which specializes in prophetic words called Revelations, a Sozo Freedom ministry and Apostolic Prayer from IHOP’s Mike Bickle.  The invite reads in part:

“Yes, you can buy a mountain for only $25. What mountain are we talking about? You can buy one or more of the 7 Mountains of Society Trainings we are offering for next year. If you would like to buy all 7, the cost is only $150. Beginning January 10th, we will be emphasizing one mountain for 2 weeks, take a week off and then move onto another mountain. We are bringing speakers in that will bring encouragement, revelation and strategies to influence each mountain of society.”

This mandate is part of the New Apostolic Reformation (“NAR”), which is not an organization as much as a network of “apostles” and “prophets” who believe the Second Apostolic Age is here. This means the age of denominations has passed, and these “anointed” apostles and prophets must govern his or her area of influence.

These people are Dominionists–they believe Christ cannot or will not come back until Christians have taken control of the earth. NAR leadership includes founder C. Peter Wagner, James Goll, Mike Bickle, Bill Johnson, Mark Chironna, Brian Simmons, Cindy Jacobs, and many others. But there are many other people out there without famous names who are the change agents for making dominionism happen.      Please read this White Paper on NAR Dominionism

To that end, here is the official lineup of speakers for the Wisconsin event, with a few bios from 3:20 Ministries I thought were significant, so I included partial statements here:

Government Mountain
Scott Allen   “In recent years, Scott has volunteered his time to grow 7 Mountain non-profit organizations.  For two years he was CEO of the Atlanta Transformation League (ATL), a new 7 Mountain effort to mobilize Christians to solve Atlanta problems with Divine solutions.”

The 7 Mountains of Culture: Must you reclaim them?

The Billion Souls network wants churches to Bring Back The King