With all the buzz about the interfaith aspect of Saddleback Church’s P.E.A.C.E. Plan and the controversy over the King’s Way initiative that partners Rick Warren’s church together with the Islamic community, many question just how Saddleback is reaching Muslims after promising not to convert anyone to Christianity.

Could it be that not converting anyone is one reason Pastor Warren is getting so many questions about Chrislam?

This is a photo of Emmaus Weekend Pentecost, an event held last June 11 and 12 in The Parish of Our Lady of Wisdom Catholic Church in Sophia Antipolis, a town near Nice, France: 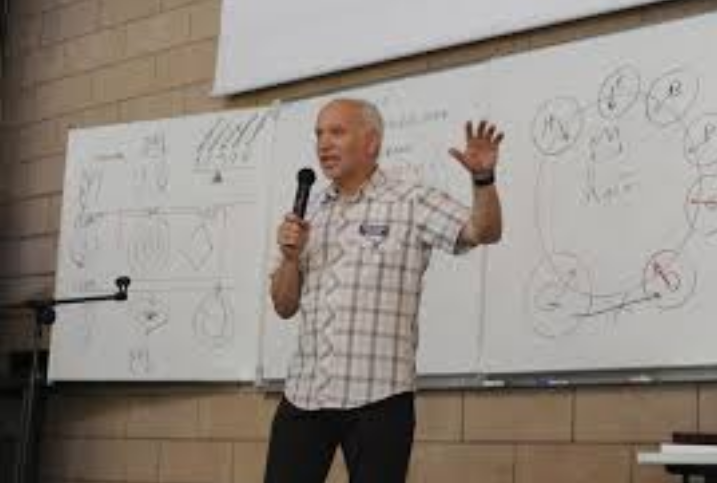 In “The Mission” workshop, which was part of an International Ecumenical Fellowship, Saddleback Pastor Abraham Meulenberg and his wife Marieke spoke to a small group of attendees.

If you’ll notice the diagram behind him, the Kingdom Circles are part of the session. Basically, it’s a simple but highly questionable evangelical tool that people are being taught to draw (sometimes called the “napkin drawing”) to demonstrate how those of other faiths can enter the Kingdom of God without converting to Christianity. If you’ve not heard of this, you need to. The video from the Common Path Alliance as well as this article from the Jesus in the Qur’an (Recently changed to Jesus AND the Qur’an) organization explains it:

The question is, does Meulenberg teach this? Or were those Kingdom Circles diagrams left over from a previous speaker, and Meulenberg taught on a different subject? I have several photos as part of a gallery that shows a progression of the diagram and notes as Pastor Meulenberg is presenting. I called Saddleback Church in an attempt to reach Meulenberg or anyone else for a comment. No one responded.

Who else teaches the Kingdom Circles methodology? Those who are proponents of “C-5 Contextualization,” (going by the names “Common Ground,” “Insider Movement,” “Camel Method,” etc.), a highly controversial movement that many believe is pure syncretism; the blending of two faiths—Islam and Christianity – into Chrislam. Those who are C-5 proponents say that just like Messianic Jews, there can be Messianic Muslims. Never mind that the “Isa” found in the Qur’an is NOT the Jesus of the Bible. Isa is not the Son of God.

Yet these Isa-worshippers say that they are Christian, and a growing number of Christian leaders are changing their paradigm from No way to Maybe to Sure, why not, in this “global conversation”:

There are many questions about how Christians should be reaching out to Muslims with the truth of the Gospel. If the gospel must be contextualized, how far can contextualization go without violating the gospel? And do the Kingdom Circles do that?

The one answer we can be sure of: There is no hope, no atonement for our sin and no way into the Kingdom of God without Jesus Christ. Christianity is the only faith that worships Jesus as the Son of God. He is our Messiah; our King.

Any movement that tells believers of other faiths and beliefs (Buddhism, Hinduism, New Age, Muslims, etc.), that they can enter the Kingdom of God without converting to Christianity must be questioned.

Warren’s Connection to the Muslim Brotherhood
Is IHOP a cult? One intern’s story