Posted By Marsha West on May 8, 2018 in Discernment, False Teacher Alert, Women and the Church
Share

Did you see Beth Moore’s recent blog post “A Letter to My Brothers“? What do you think about what she said?

Michelle was in no rush to respond, so her reply is very well-thought-out. As you will see, she offers her overall impressions and then addresses a few of Moore’s statements from the letter she penned. Michelle also provides us with a biblical assessment of Beth Moore’s teaching and calls her to task for throwing out “unsubstantiated, generalized accusations against a wide swath of nameless Christian men and churches.” 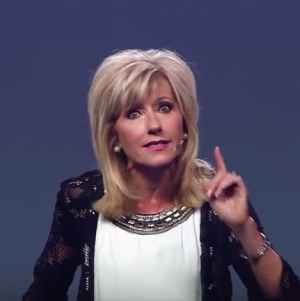 “I had no personal aspirations to preach nor was it my aim to teach men. If men showed up in my class, I did not throw them out. I taught.”

The first thing you need to know about Beth Moore, if you don’t already, is that she is a false teacher who is living in current, unrepentant sin. She teaches false doctrine and twists Scripture to scratch the itching ears of her followers. She sinfully and rebelliously preaches to men, and she yokes in “ministry” with false teachers. These are not my personal opinions, these are verifiable facts. (See my article Five Reasons It’s Time to Exercise Moore Discernment for the evidence. You don’t have to take my word for it. Compare the things she says and does with Scripture (rightly handled and in context) and it will quickly become crystal clear.)

For years, I have repeatedly heard people try to brush these things aside as “everybody makes mistakes” or “no big deal.” These are not mistakes. These are sins that she not only has not repented of and stopped, she actually tries to justify. Sin is a big deal. It’s such a big deal to God that He sent His Son to be tortured to death for it.

Woe to those who call evil good
and good evil,
who put darkness for light
and light for darkness,
who put bitter for sweet
and sweet for bitter!
Isaiah 5:20

We would not say, “It’s no big deal,” if we knew a pastor who was proudly open about his serial adultery or joyfully endorsed homosexuality. Beth Moore’s open, proud, and unrepentant sin is just as inherently sinful. Why Christians continue to support her is both grievous and a mystery to me.

The reason it’s important you understand, for the purposes of this article, that Beth is a false teacher, is that you should view any theological statements she makes with a high degree of suspicion and discernment. Whatever theology Beth espouses is a house built on a foundation of sand because she is not hearing and obeying the (written) Word of Christ. Yes, she may, at times, say things that are perfectly biblical. That is by design. But you cannot have a sound structure when your foundation is faulty.

It brings me absolutely no joy to have to say such things. I would much rather joyfully point my readers to Beth as a doctrinally sound resource as I have done on many other occasions with many other doctrinally sound teachers. But in order to be obedient to Scripture, these things must be said in loving warning to Beth herself and to her followers.

Now, on to her article…

First, I’d like to give my overall impressions, and then move on to a few particular statements.

If I had to sum up this article in one word, it would be “vague.” I have more questions than answers after reading it. How, exactly, does Beth Moore define misogyny? Who is this large swath of men committing this misogyny? What, precisely, are they doing that constitutes misogyny? What sector of women are they performing these misogynistic acts against? What does she want these men to do instead of whatever it is they are doing? What, specifically, is the church supposed to do in response to this nebulous accusation of misogyny?

How is anyone supposed to agree with or refute the facts of what Beth is saying unless she gives clear explanations and details? What Beth has done in her blog post is to throw out unsubstantiated, generalized accusations against a wide swath of nameless Christian men and churches and she expects us to take her word for it that there’s some epidemic of misogyny across the board in the church.

There’s no there there. And I think there are several reasons for that.

Certainly, there are individual Christian men, even pastors, of every theological stripe who have had moments, like the ones Beth cites from her personal experience, in which they’ve acted like pigs toward women, or might even have a chauvinistic attitude toward women in general. Let me be clear- that’s sin, and they absolutely need to be rebuked individually for those sins and repent.

But among Bible believing, doctrinally sound churches and genuinely regenerated Christian men, there isn’t this widespread, large scale, general attitude of condescension toward and disdain for Christian women (that’s my guess as to what she means by “misogyny”, since she didn’t define it) who are obedient to the roles God lays out for us in Scripture and who don’t teach false doctrine. There just isn’t. (This general attitude might be more pervasive among men who claim to be Christians and/or subscribe to false doctrine, but Beth Moore herself has helped build that category of “Christians” with her false doctrine and unbiblical behavior. You can’t build a shoddy wall and then complain when it falls on you.)

Get LifeWay on the phone and commission them to survey a thousand genuinely regenerated, doctrinally sound women who aren’t preaching to men or partnering with false teachers, and who attend generally doctrinally sound churches, and ask them if they normally feel oppressed, patronized, or diminished by their churches or Christian men as a whole. I can practically guarantee that the answer will be a resounding “no.”

I believe that’s one of the reasons Beth’s article is so vague. She thinks her personal experience is common to all Christian women. But it’s not, because she and her poor theology and behavior don’t represent all Christian women, or even most of us.

I think another reason her article is so vague is that she can’t clearly state what she really means because she knows it’s unbiblical. Over the last few years, more and more people – high profile pastors, “regular Joe” pastors, average Christian men and women – have begun to realize and to speak out about the fact that Beth is a false teacher, preaches to men, and yokes with other false teachers. And though some small segment of those folks might qualify as “hyper-fundamentalists” (whatever that means – another vague, undefined, and, this time, intentionally pejorative term), all the ones I’m familiar with who have warned against Beth are reasonable, humble, credible, doctrinally sound Christians, not a tiny bunch of wild-eyed crazies with pitchforks at a Beth Moore book burning.

And, interestingly, while the rebukes that have actually reached Beth’s ears have probably come mostly from men (because men are pastors and have larger platforms and a louder voice), at the grassroots, non-celebrity, average person in the pew level, the vast majority of people warning against Beth are women. Generally speaking, most pastors and Christian husbands have no clue about the problems with Beth Moore. They assume that because she claims to be a Christian and a Southern Baptist, and because LifeWay endorses her and has helped build her empire, she must be doctrinally sound. I know because I hear from women all the time asking how to approach their pastors about the fact that their church is using Beth Moore “Bible” studies. Does Beth consider the discerning women who warn against her to be misogynistic?

I would suggest that the majority of any “misogyny” Beth has received or thinks is pervasive in evangelicalism is largely the result of Christians who know their Bibles speaking and acting upon that knowledge. Men ignored her in elevators and at “team meetings”? She’s “the elephant in the room with a skirt on”? The Bible says:

If anyone comes to you and does not bring this teaching, do not receive him into your house or give him any greeting, for whoever greets him takes part in his wicked works. 2 John 9-11

I appeal to you, brothers, to watch out for those who cause divisions and create obstacles contrary to the doctrine that you have been taught; avoid them. For such persons do not serve our Lord Christ, but their own appetites, and by smooth talk and flattery they deceive the hearts of the naive. Romans 16:17-18

As for a person who stirs up division, after warning him once and then twice, have nothing more to do with him, knowing that such a person is warped and sinful; he is self-condemned. Titus 3:10-11

I do not permit a woman to teach or to exercise authority over a man; rather, she is to remain quiet. 1 Timothy 2:12

And in this day when the “Pence rule” is ridiculed and men’s lives are being destroyed with accusations of sexual harassment right and left for the most minor of real or imagined infractions, is it any wonder that any Christian man might keep his distance from any woman who’s not his wife?  Continue reading

Leaning Toward Heresy
Discernment: A Spiritual Battle, Not a Logical One