Posted By Marsha West on March 30, 2018 in Christ’s Atonement
Share

The account of the crucifixion of Christ is found in the New Testament:

Josh Buice reminds us that “The entire scene of the cross is filled with brutality, blood, insult, shame, and death.” So, why do Christians call the day Christ was nailed to a cross Good Friday? Should we really think of His brutal crucifixion as a good day….or was it, as some say, actually “cosmic child abuse”? In his blog post over at Delivered By Grace, Pastor Buice takes on the naysayers. He writes: 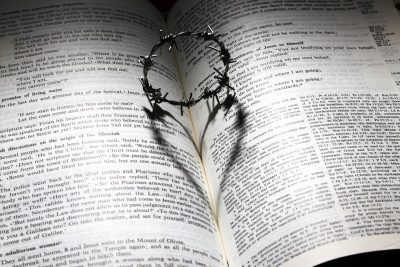 On Good Friday each year, Christians remember the most glorious sacrifice and the most horrific murder that ever occurred in human history. Why do we refer to the Friday after Thanksgiving as “Black Friday” and the Friday before Easter “Good Friday”? Should they be reversed? It’s the day set aside on the calendar to remember the substitutionary sacrifice of Jesus for the sins of his people and the heinous murder of God’s Son. Why would we celebrate that day as a good day? Many people flow through Good Friday as if it’s a normal day and they give little to no recognization for the significance of what happened on the day Jesus died. Others celebrate it from a heart of worship. Still others mock the day—calling it cosmic child abuse.  Famed atheist Richard Dawkins writes the following:

The God of the Old Testament is arguably the most unpleasant character in all fiction: jealous and proud of it; a petty, unjust, unforgiving control-freak; a vindictive, bloodthirsty ethnic cleanser; a misogynistic, homophobic, racist, infanticidal, genocidal, filicidal, pestilential, megalomaniacal, sadomasochistic, capriciously malevolent bully. [1]

Is God guilty of abusing his Son on the cross? According to Isaiah 53, “It pleased the LORD (YHWH) to crush him (Jesus)” (Is. 53:10). Some have stated that the Father was “well pleased” with his Son at the baptism (Matt. 3:17), and then he was vengeful with his Son on the cross. How should we reconcile such statements? Why was Good Friday a good day? How can the death of Jesus be considered a good thing? Is it cosmic child abuse worthy of laughter or substitutionary sacrifice worthy of worship?

Good Friday Was Good Because God Is Good

The entire scene of the cross is filled with brutality, blood, insult, shame, and death. That does not exactly sound like a good day, but it was. When we look at Good Friday and all of the events that transpired on that day through the lens of human self-preservation and humane concepts—it’s a horrible day. When we view the events of Good Friday through the lens of God’s justice—things are put into perspective. Just the statement, “God is good” is often thrown around so casually that people fail to get the point. By the goodness of God, we don’t mean God gives us good things like a cosmic grandfather figure. God is good and because God is good—he must punish sinners for their guilt. This is demanded by the justice of God.

Far too often, God is misrepresented by the Christian community as a cosmic bellhop or a loving grandfather in the sky who showers all people with salvation regardless of their sin. Still others misrepresent God as a vengeful and hate-filled cosmic being who is always looking to zap people with judgment. God is neither of those caricatures. When we see God issuing love and grace to guilty sinners—it’s based on God’s ability to love which is not disconnected from his necessity to judge. Grace is offered on the basis of his satisfaction. The only way God can offer grace is by the fulfillment of his justice. However, if God judges sinners—he is good. If God saves sinners and spares them from wrath—God is good.

God would not be good if he merely bypassed the demands of justice and allowed guilty sinners to sneak in the backdoor of heaven. Such underhanded deals are common in this world of sin, but the moment that God offered such a corrupt deal to a guilty sinner is the moment that he would cease to be good. The holy justice of God is pure and righteous and it requires that all sinners will be justly judged for their sins. Therefore, as God is punishing his Son on the cross, we must remember that he was not punishing him for his sin. Instead, Jesus became a substitute and was being punished for the sins of God’s people (every person who would be the recipient of grace through Jesus Christ—every one of God’s elect past, present, and future). Continue reading

Come Out From Them and Be Separate
Jordan Peterson, Jung, and Hope for the Faint-Hearted