Posted By Marsha West on February 10, 2018 in Discernment
Share

Aaron Brake offers three different views of Truth: The pragmatic theory; coherence theory; and  correspondence theory. In his piece over at Stand to Reason, Brake explains these views and then makes the case for what he believes is the only option for the Christian. He writes: 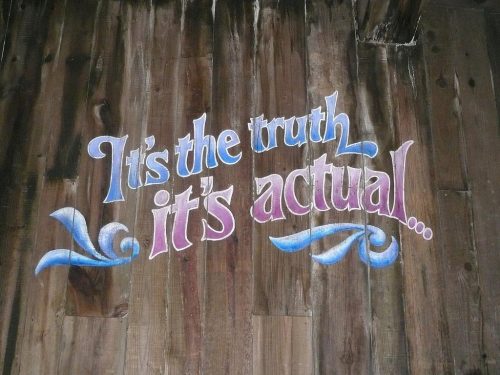 “What is truth?” Pontius Pilate wasn’t the first, or the last, to ask this.

The question, at first blush, may sound profound. In reality, I think we all know the answer to this age-old inquiry. I say that because we presuppose a certain definition of truth in our speech and actions every day of our lives. Perhaps the problem is not that we do not know what truth is but rather that we do not know that we know. In other words, we may not be confident in our knowledge of what truth is because we struggle to articulate a definition. But this is easily remedied if we take a few moments to reflect on the nature of truth.

Historically, there have been three dominant theories of truth put forth by philosophers:[1]

First, there is the pragmatic theory of truth: truth is what works. Three major problems with this view are as follows:

Problem #2: The view is self-defeating. If truth is what works, then the pragmatic theory itself must not be true, since most philosophers throughout the ages have not held to the pragmatic theory (i.e., it didn’t “work” for them) but rather have found the correspondence theory to be much more useful!

Second, there is the coherence theory of truth: truth is logical consistency (coherence) among a set of beliefs an individual holds. Three major problems with this view are as follows:

Problem #2: For the same reasons as problem #1, and like the pragmatic view, this view implies relativism. On the coherence view, what is true is relative to each individual’s belief system. Two contradictory beliefs may both be “true” as long as they cohere with their respective systems. But relativism is false; therefore, like the pragmatic view, the coherence theory must be rejected.

Problem #3: This view, like the pragmatic view, seems counterintuitive. The reason is that the coherence theory cuts the knower off from the real world. What is true is not what matches reality but rather what coheres within a given system of belief. But most people intuitively understand that truth has something to do with the way the world really is.

Coherence is important but not enough. It is a necessary condition for truth but by itself is not sufficient. Continue reading

Are you easy prey for false prophets?
Enneagram: The Road Back to You, Or to Somewhere Else?