Posted By Marsha West on August 20, 2015 in Homosexual Agenda
Share 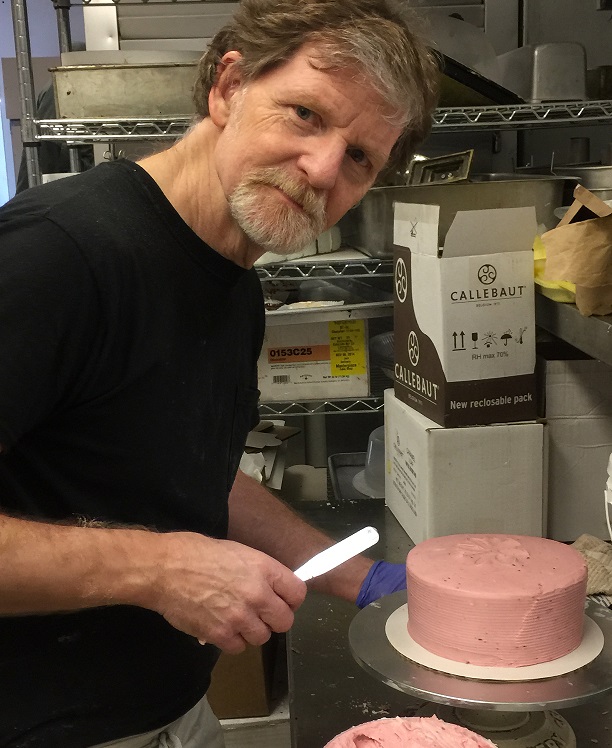 (The Daily Signal, by Ken McIntyre) Jack Phillips knows he can’t do anything about those who call him a hater. He says he just loves to get up each day to design and make cakes, cookies and brownies to honor God—and to make a living.

Phillips, a Christian since the late 1970s, says creating cakes for same-sex marriages would go against his constitutionally protected belief that marriage is the sacred union of a man and a woman, as taught in the Bible.

His lawyers, who describe him as a “cake artist,” also argue that the First Amendment means the government can’t compel Phillips to use his talents to express a message supporting gay marriage.

Phillips also chooses not to create cakes depicting witches or ghosts for Halloween, or to design cakes with sexually suggestive images.

“There’s just certain events, certain cakes I don’t make,” Phillips, 59, told The Daily Signal in a phone interview Monday afternoon from his shop in Lakewood, Colo. “That was one of them.”

So while his case winds its way through legal channels, perhaps destined for the U.S. Supreme Court, Phillips has opted since March 2014 not to take any new orders for wedding cakes rather than be forced to create them for two men or two women.

So far, Phillips, who belongs to a Baptist-rooted church, has lost at each step of the legal process.

On Aug. 13, the Colorado Court of Appeals decided that Masterpiece Cakeshop discriminated against two gay men, Charlie Craig and David Mullins, when Phillips declined in July 2012 to take the couple’s order for a cake to celebrate their wedding in Massachusetts.

Later on the day of the ruling, Phillips’s two sisters and a brother-in-law launched an online fundraising effort, “Support Jack Phillips,” to help offset the bakery’s ongoing losses. Its home is Continue to Give, a Christian-oriented “crowdfunding” site.

The last time Phillips whipped up a wedding cake, based on an existing order, was in November. This is the first year he hasn’t taken orders for or made wedding cakes since the shop opened.

“The profit range was higher on the wedding cakes. Now we try to get more volume,” Phillips said. “But God has been supplying everything we need so far.”

Phillips was born a few miles from his bakery. He and his wife Debi, married nearly 38 years, have three children now in their 30s: Lisa works at the bakery decorating cakes, Jennifer lives in Montreal, and Jeremy is a computer programmer in California.

His 88-year-old mother volunteers at Masterpiece Cakeshop, preparing deposits and paying bills a few hours each week. His father, a World War II veteran, died in 1996.

In the interview with The Daily Signal, Phillips talked about how both loyal customers and strangers have voiced support for his convictions, including “dozens or hundreds” of gays and lesbians.

Phillips, who has been a baker all of his adult life, also recalled his first and only encounter with the two men who initiated legal action against him and what it has meant to his business, his marriage, and his family.

And he spoke about why, as a Christian, he has to take this stand.

Here are excerpts of the interview, edited for length and clarity:  Continue reading

Rev. Graham: “The God of Islam is Not the One True God of the Bible”
Three Kinds of Christians