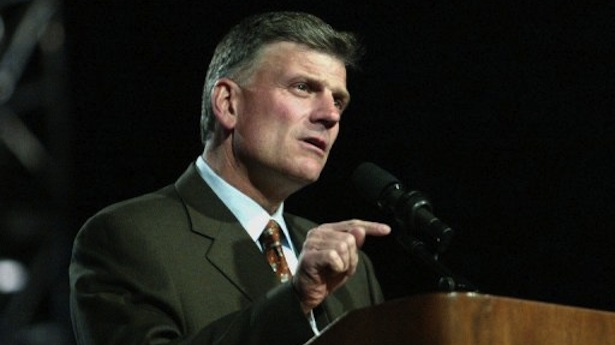 (CNS News) In reaction to news reports that 26-year-old Kayla Mueller was regularly raped by Islamic State leader Abu Bakr al-Baghdadi before being killed, and that Islamists believe the Quran gives them permission to rape and that it pleases God, Christian evangelist Franklin Graham said “the god of Islam is not the one true God of the Bible.”

“Now it has been

released that Kayla Mueller, the 26-year-old American aid worker captured by ISIS and killed in February, was repeatedly raped by ISIS top leader Abu Bakr al-Baghdadi and another senior IS member,” said Rev. Graham in an Aug. 15 post on Facebook.

“This is a barbaric specialty of ISIS,” he said.  “[T]hey have a highly organized sex trade industry, even keeping an inventory of sex slaves.”

The New York Times reports about the unbelievable horrors and trauma experienced by women and girls as young as 12 as they are repeatedly raped and brutalized by ISIS,” said Rev. Graham. “The report reveals that the men prayed before and after raping them, saying that the Quran gives them the right to do this and that it pleases their god.”

“I’ll say it again—the god of Islam is not the one true God of the Bible,” said Rev. Graham. “We need to pray for Christians, Yazidis, moderate Muslims, and all those across the Middle East who are persecuted and suffering at the hands of ISIS.”

Kayla Mueller was kidnapped in August 2013 while in southern Turkey, where she was doing humanitarian work with Syrian refugees. As reported in the Daily Mail, the BBC, and other media, Kayla’s parents were told by U.S. officials earlier this year that , during their daughter’s captivity, she was held at the house of Abu Sayyaf, an Islamic State (IS) official in Syria.

That house was regularly visited by IS leader Abu Bakr al-Baghdadi, who repeatedly raped Mueller, according to U.S. officials who spoke with Muller’s parents.  Kayla Mueller also was regularly raped by Abu Sayyaf.

“We were told Kayla was tortured, that she was the property of al-Baghdadi,” Kayla’s parents told ABC News. “We were told that in June by the [U.S.] government.”   American officials gathered details about Kayla Mueller’s horrific captivity in part from testimony provided by two Yazidi women who also had been held as sex slaves at the Sayyaf house and later escaped.

The Islamic State claims that Kayla Mueller was killed during a coalition air strike on Feb. 10, but the Pentagon says she was murdered by the IS.   Continue reading

Genetic research scientist: likely some aborted babies are “alive until their hearts are cut out”
24 Questions for Jack Phillips, the Baker Who Gave Up Wedding Cakes for God