Posted By Marsha West on March 29, 2016 in Spiritual Warfare
Share

Must we know the enemy if we are going to do effective spiritual warfare? According to Anton Bosch of Anton Bosch Ministries “our knowledge base on demonology (the study of demons) is rapidly being expanded by means of extra-biblical sources, over-active imaginations, science-fiction books and even Hollywood. All these weird ideas are rapidly being added to Scripture to form a picture never revealed by God.”

In this piece, Bosch examines the unbiblical teaching found in many charismatic churches regarding Satan and his demons and he sets the record straight. He writes: 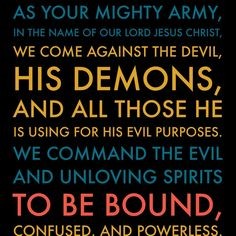 “Binding Satan” is unbiblical. “Involvement in this kind of material does not glorify Christ, which should be our ultimate goal, but it glorifies the kingdom of darkness.”

Paul writes about the devil that “we are not ignorant of his devices” 2 Corinthians 2:11, yet it seems that many of us are ignorant of the tricks and devices the evil one uses in his attempts to thwart the plan of God. Satan knows that many cannot be persuaded or intimidated to give up the good fight, so he uses schemes that serve his purpose just as well. One of those is diversion from the central issue.

Some people speak of “chasing rabbits” when we lose sight of the real goal and begin to follow red herrings and other things that are designed to get us off course.

Our ultimate goal should be to know, glorify, and be conformed to the Lord Jesus Christ. Paul said: “Yet indeed I also count all things loss for the excellence of the knowledge of Christ Jesus my Lord, for whom I have suffered the loss of all things, and count them as rubbish, that I may gain Christ and be found in Him, not having my own righteousness, which is from the law, but that which is through faith in Christ, the righteousness which is from God by faith; that I may know Him and the power of His resurrection, and the fellowship of His sufferings, being conformed to His death, if, by any means, I may attain to the resurrection from the dead.” (Philippians 3:8-11).

Anything else is a minor issue. Satan knows if he can get us to focus on anything other than Christ, he has us majoring on a minor and we are diverted from God’s purpose for our lives. He therefore uses many things, even spiritual, biblical, and good things to get us to waste our time on futile pursuits that rob time and devotion that belongs to God alone.

One of these areas that is trapping more and more Christians and leaders is the study of Satan and demons. I have heard preachers say that we must know the enemy if we are going to do effective spiritual warfare. Really? So the Bible is a handbook that, amongst other things, tells us all about the devil and demons, where they come from and how they operate? Actually, no. The Bible tells us very little about Satan, his origins, the origin of demons, how they function etc. It simply accepts his existence as the enemy of God and His people.

Here is what the Bible does tell us about Satan: He occupied a powerful place in heaven but was cast out because of his pride and ambition (Isaiah 14, 1Timothy 3:6). He tempted Eve, Adam (Genesis 3) and Jesus (Matthew 4:1). In Job, he had access to God and power to afflict Job (under God’s authority). He has many schemes, opposes the work of God in people (Luke 8:12), tempts and deceives people (Revelation 12:9), and unbelievers are his children (1John 3:8,10). Satan was defeated at the cross but still attacks Christians (Ephesians 6), will empower the Antichrist and False Prophet, and will eventually be cast into the lake of fire (Revelation 20:10).

That’s all. We do not know when he fell and was cast out of heaven, where he is “resident” at the moment or what he looks like. There is very little we know and a lot we do not know.

Once again, that is about all we know: The sum total of what God revealed in His Word about Satan and demons can be contained in two paragraphs! We do not even know where demons come from, what they look like and when they will be cast into the lake of fire. It is important to note that we cannot even be certain that demons are the same as fallen angels – the Bible simply does not say.

Yes, I know you maybe think we know a lot more, but we don’t. Here’s the thing. Most of what fills the many books and sermons on the subject are pure conjecture and speculation. We cannot build any doctrine on conjecture, analogy or oblique references. In spite of this, a significant portion of what is held as doctrine by Christians and published in books is pure speculation. Yes, we can speculate and guess, but this can never be doctrine and we should rather use our time obeying what we do know than being fascinated with what we do not know.

But even worse, our knowledge base on demonology (the study of demons) is rapidly being expanded by means of extra-biblical sources, over-active imaginations, science-fiction books and even Hollywood. All these weird ideas are rapidly being added to Scripture to form a picture never revealed by God. Some of the ideas that authors and preachers are propagating seem remarkably similar to the monsters that shamans, witchdoctors and drug addicts “see” in their drug-induced delusions! These include vivid images of extra-terrestrials, hybrid super-humans, UFO creatures, chimera monsters, mythological gods, ghosts and apparitions of the dead, fairies and elves, Bigfoot and giants.  Continue reading

See our White Papers on Angels, Demons and Spiritual Warfare and Occult-Sorcery

Evangelicals Divided, A Movement Fractured, Part 1
Russell Moore: What Will Be The SBC’s “Ethics” In The Defense of Abortion?

2 Responses to Doctrines of Demons