C. Peter Wagner, the man who helped revive the Latter Rain cult of the 1950’s and later dubbed it the New Apostolic Reformation (NAR), died last week.  Being that Wagner was the Grand Poobah of the NAR, this is a huge loss for this growing movement.  In a piece I wrote entitled Religious Right uniting with Religious Renegades I brought to light that Wagner was the NAR founder.  Wagner was not happy about that and sent AN URGENT MESSAGE FROM PETER to his mailing list categorically denying that he was the founder. He wrote:

The NAR is not an organization. No one can join or carry a card. It has no leader. I have been called the “founder,” but this is not the case. One reason I might be seen as an “intellectual godfather” is that I might have been the first to observe the movement, give a name to it, and describe its characteristics as I saw them.

When he died, Charisma News penned a piece saying that Wagner had “passed into glory.”  Richard Haas couldn’t disagree more so he voiced his view of the man over at Pulpit & Pen, as he felt the truth wasn’t being reported. In his piece he asked, “Is it harsh or judgmental to say that C. Peter Wagner has not passed into glory as Charisma News, and others would lead us to believe?”  No, says Haas, “it is not judgmental or insensitive to speak the truth.”

Sadly, in a piece he wrote for Christianity Today, Ed Stetzer, president of LifeWay Research–the publishing arm of the Southern Baptist Convention–held back the truth that Peter Wagner was seen by many in the Church as a wolf in sheep’s clothing who spent the latter part of his life leading the sheep astray.  (Read more on this here) Stetzer wrote that he and his long time friend had disagreements, that he was controversial, and that he was a “fascinating and brilliant man… and he loved the Church.” Stetzer may believe that Wagner loved the Church.  However, many people believe otherwise.  There are a large number of Christians who happen to believe that the man who dubbed himself “Presiding Apostle” of the NAR as well as the “Convening Apostle” of the International Coalition of Apostles was largely responsible for leading the Church into apostasy.

So, let’s listen to Richard Haas speak the truth about C. Peter Wagner.  He writes: 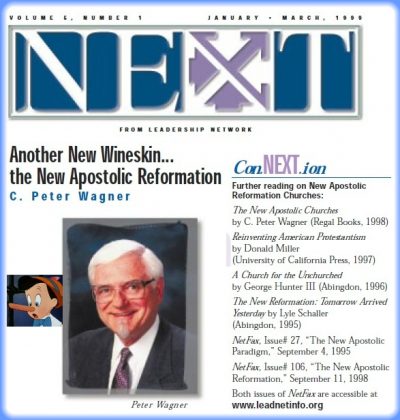 Just recently on Friday, October 21st at 2:30 pm false apostolic teacher C. Peter Wagner passed into eternity.  One of Wagner’s best friends, “apostle”Chuck Pierce, confirmed Wagner’s death on his Facebook page Friday.  In honor of Wagner’s death, longtime friend Ed Stetzer wrote an article at Christianity Today entitled “C. Peter Wagner (1930-2016), Some Thoughts on His Life and Passing” highlighting their friendship.  While death can be a sad occasion for those here on earth as they face the lose a close friend, family member or leader. It is an even more woeful thought that the one who died, C. Peter Wagner, is spending eternity in hell. Even more disheartening is that a prominent face in evangelicalism, Ed Stetzer is leading many astray and right into the welcoming arms of the debaucherous neo-evangelical movement by honoring Wagner’s death.  Stetzer is essentially aiding in leading people to the same false christ that Wagner worshiped by paying tribute to Wagner’s death. The death of Wagner should not be celebrated, but be used as a lesson to show where false teaching leads — to hell.

Is it harsh or judgmental to say that C. Peter Wagner has not passed into glory asCharisma News, and others would lead us to believe? No, it is not judgmental or insensitive to speak the truth. Many may criticize me or Pulpit & Pen for striking while the proverbial iron is still hot, but there is no better time in which to speak truth. Truth is not a respecter of time, emotions, people’s states of mind or what the public deems as proper etiquette. Truth only knows one thing–that it must be proclaimed. As Christians, apologists of the faith once delivered, and polemicists, we must be ready always to speak the truth; no matter the minute, the hour, or the day the truth must go forth.  From where do we gather our truth? We receive our final authority, our truth, on all matters from the sufficiency of the closed canon of Scripture — God’s Word.

Wagner is often referred to as the grandfather of NAR movement.  It was Wagner that invented the term “New Apostolic Reformation” and then charged himself as God’s appointed leader of this new extrabiblical organization. It is through Wagner and his promotion of the heresy of Modern Montanism that the Charismatic window of heresy was slid open, mainstreaming it into today’s neo-evangelical landscape. Wagner had far-reaching influence on outer fringe sub-Christian sects that support such false teachings Dominionism; The 7 Mountain Mandate; Third Wave Revivalism. Wagner’s teachings had power over groups like The Latter Rain Movement; Joel’s Army; IHOP; Bill Johnson’s Bethel Church, The Hillsong Media Empire.  In Wagner’s later years he became the patriarch of the heretical  Church Growth Movement. It is due in large part to Wagner that many of these outliers and skeptical groups are now part mainstream Christianity which form this quasi-evangelical movement we see today.  Continue reading