Posted By Marsha West on December 26, 2015 in Politics
Share

Rev. Franklin Graham, son of evangelist Billy Graham, is unhappy with the way things are going in America. What will solve the problem?  He believes that if “godly men and women” get involved in the political process they can “change this wicked system.” How are we to determine if a person is “godly”?  The article doesn’t tell us.  Rev. Graham is quoted as saying that he’d like to see people who have “biblical values” run for office. Certainly he knows that having biblical values does not mean a person is an authentic Christian. There are untold numbers of counterfeit Christians in America!  In fact, many of them already hold public office and are the CEO’s of megachurches.  Likewise, counterfeits run ginormous “Christian” organizations.  One example of a “Christian” politician is our president, Barack Obama. An example of a megachurch CEO is “America’s Pastor” Rick Warren.   Do you see the dilemma? 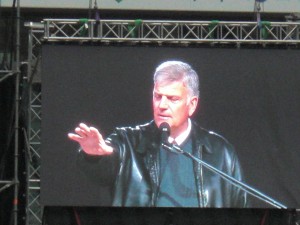 Evangelist and Samaritan’s Purse President Franklin Graham says he is quitting the Republican Party in light of the GOP-controlled Congress passing a spending bill that maintains government funding for Planned Parenthood, the nation’s largest abortion provider.

Graham made the comments on Facebook Monday, three days after the spending bill passed the Republican-controlled House on a vote of 316-113. A majority of members from both parties voted for it. Voting for the bill were 150 Republicans and 166 Democrats. A total of 95 Republicans and 18 Democrats voted against it.

When undercover videos were released earlier this year showing Planned Parenthood workers talking callously about dissecting unborn babies, some members of the House GOP threatened to shut down the government until government funding was axed.

Graham then urged Christians across the nation to run for political office, beginning with local elections.

“Unless more godly men and women get in this process and change this wicked system, our country is in for trouble,” he wrote. “I want to challenge Christians, even pastors, across the country to pray about running for office where they can have an impact. We need mayors, country commissioners, city council members, school board members who will uphold biblical values.”  Continue reading

Merry Christ-mas!
Christ Hidden in Our Schools, While Muhammad Roams the Halls Freely