Breitbart informs us that: 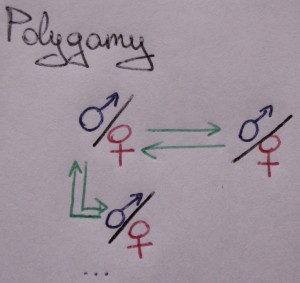 Green Party leader Natalie Bennett has said her party would consider allowing polygamous marriages and civil partnerships in the UK.

Speaking in a Q&A session with PinkNews readers, the Green leader responded to a question from Redfern Jon Barrett, who asked: “As someone living with his two boyfriends in a stable long-term relationship, I would like to know what your stance is on polyamory rights. Is there room for Green support on group civil partnerships or marriages?”

Bennett responded: “We have led the way on many issues related to the liberalisation of legal status in adult consenting relationships, and we are open to further conversation and consultation.”

One of the leading criticisms levelled by opponents of gay marriage was that it could create a ‘slippery slope’ that would lead to marriage being redefined in other ways, including allowing more than two people to enter into a union.

At the time the bill creating gay marriage was going through the House of Commons, Conservative MP Matthew Offord asked: “Why is the government saying there should be same sex marriages? Why should it not also be blood relatives? Why should it not also be polygamists? It seems they are rushing this forward and they have not thought out what the consequences are going to be.”

His colleague Craig Whittaker also said: “What will our successors be discussing and have to legislate for in the future? Polygamy? Three-way relationships? Who knows what else?”

Earlier this week, the Asian Pacific Society of Cardiology Congress heard that polygamy quadruples the risk of heart disease. Dr Amin Daoulah, with the King Faisal Specialist Hospital and Research Centre in Jeddah, Saudi Arabia, said: “We found an association between an increasing number of wives and the severity and number of coronary blockages.

“This could be because the need to provide and maintain separate households multiplies the financial burden and emotional expense. Each household must be treated fairly and equally, and it seems likely that the stress of doing that for several spouses and possibly several families of children is considerable.”