Down, down, down the slippery slope America slides.  We’re traveling at warp speed and at the rate we’re going we’ll hit rock bottom sooner than we anticipated.  So brace yourselves, brethren.  You ain’t seen nothin’ yet.  In this piece, Ryan T. Anderson, columnist for The Daily Signal, tackles the subject of polyamory.   We knew that the High Court’s decision to legalize same-sex “marriage” would change everything.  And it has.  Ever heard of a “throuple”?  No? Well, you’re about to. 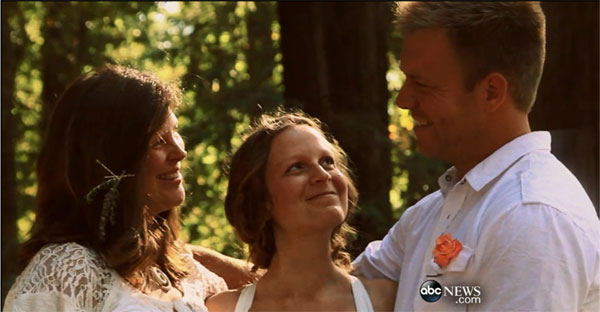 Picture courtesy of The Daily Signal

The video (which you should watch at your own discretion, it includes discussions of three-way sex) profiles a self-described “triad” or “throuple”—a three-person couple.

It discusses their desire for marriage equality.

After all, now that the Supreme Court has declared marriage must be redefined to include so-called “marriage equality” for same-sex couples, why not for throuples?

There is, in fact, a long history of such arguments, as I explain in my new book, “Truth Overruled: The Future of Marriage and Religious Freedom.”

Before the Supreme Court’s ruling, Professor Judith Stacey of New York University expressed hope that redefining marriage would give marriage “varied, creative, and adaptive contours,” leading some to “question the dyadic limitations of Western marriage and seek . . . small group marriages.”

She supports “minimal marriage,” in which “individuals can have legal marital relationships with more than one person, reciprocally or asymmetrically, themselves determining the sex and number of parties, the type of relationship involved, and which rights and responsibilities to exchange with each.”

In 2009, Newsweek reported that the United States already had over five hundred thousand polyamorous households, concluding that:

perhaps the practice is more natural than we think: a response to the challenges of monogamous relationships, whose shortcomings . . . are clear. Everyone in a relationship wrestles at some point with an eternal question: can one person really satisfy every need? Polyamorists think the answer is obvious—and that it’s only a matter of time before the monogamous world sees there’s more than one way to live and love.

As I explain in “Truth Overruled,” now that the court has eliminated sexual complementarity as an essential characteristic of marriage, no principle limits civil marriage to monogamous couples. And in fact the legal challenges to monogamy have already begun. Continue reading