Costi Hinn begins his piece with an account of someone who has allegedly been slain in the spirit. At the end of the virtual tour. the person declares: I have heard some Christians say this sort of experience was demonic, while others say it’s just hypnosis. To be honest, I haven’t seen it in the Bible and don’t really know what it is…but I really feel like it’s the Holy Spirit…

In a piece over at Equip the Saint, Hinn follows up by examining what the Bible says about a practice that has become normative in charismatic churches all over the globe. Professing believers must ask themselves the obvious question: Is getting slain in the spirit biblical….or not.  Costi Hinn, nephew of Word of Faith prosperity preacher Benny Hinn who’s well known for fake healings, false prophecies and slaying people in the spirit, provides the answer to the question.  He writes: 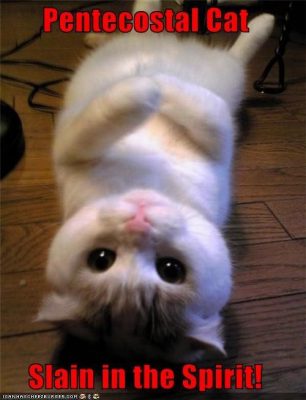 The virtual tour you’ve just read through is taking place all over the world every single week in tens of thousands of charismatic churches, healing crusades, youth groups, kid’s camps, Third Wave revivals, and N.A.R. conferences. Many conservative Christians are scared to death of their children ever going to one of these services but when asked what the issue really is, most cannot explain it but to say, “It’s unbiblical” or “not God.”

We need a better answer than that.

So what exactly does someone mean when they say, “I got slain in the spirit!”? This phrase describes what many believe to be a touch from God that sends them falling to the ground – literally. Those who ardently defend this practice claim that it’s God’s manifest presence in a service that causes people to fall over. According to them, God’s power is usually “imparted” to people by a pastor who lays his hands on them, blows his breath on them, waves his hand, waves his jacket, or shouts a phrase like, “Fire!” or “Touch!” These gestures cause people to go flying in all directions. Sometimes it even occurs when a certain song is sung by the worship band, or because people are overcome with emotion during a portion of the service. Often times those being slain in the spirit will manifest on the ground by making animal sounds, crawling, slithering, shaking, convulsing, weeping, laughing, and experiencing trance-like euphoria. Some say they feel electricity when the pastor touches them, others feel warmth, while others are not able to stand under their own strength for hours afterwards. All of this is believed to be the work of the Holy Spirit as He refreshes and renews spiritually empty and broken people. With over 500 million charismatics, and 1.5 billion Hindus (Kundalini Awakening)  practicing slaying people in the spirit, it is no exaggeration to state that at least 2/7 of the entire world has beliefs tied to falling or shaking under the power of some sort of spirit. This is not fringe behavior. This is now mainstream spiritualism and considered highly normative – it’s everywhere.

But does the Bible have any evidence to prove normative activity by the Holy Spirit that causes people to shake, slither, laugh, bark, crawl, or convulse in the church? When God interacts with people in the Bible, does He electrocute them into a seemingly drunken state where speech is slurred and the body uncontrolled? Can a preacher (shouting “FIRE!”) really cause heaven to invade your life on earth? Is there a chance that when some of these charismatic experiences are identical to manifestations found in Hinduism that there is a demonic aspect to it?

WHAT DO ‘SLAIN IN THE SPIRIT’ ENTHUSIASTS CLAIM?

First, there are a number of varying claims depending on what charismatic group is explaining them. That in itself proves how much confusion there is surrounding the practice.

To support these general claims and explanations, charismatic enthusiasts use specific Bible passages as proof-texts for being slain in the spirit. Christians who aren’t biblically literate won’t usually notice the interpretive gymnastics being utilized, but when we study what the Bible actually says, the myths behind being slain in the spirit get biblically busted.  Continue reading

33 Responses to Mythbusters: “Slain in the Spirit”