The goal of ISIS  is to bring the entire world under the caliphate and also come under sharia law.  In other words, world domination.  And you’d better believe that Islamic terrorists will stop at nothing to achieve this.  An article in The Economist tells us that,

France has done its collective best to offer Muslim citizens a hard secularist bargain: accept the ideals of the republic, which include the religious neutrality of the state, and you will be as free to practice your religion as any Catholic, Protestant or Jew.

“That is a brilliant statement,” opined Albert Mohler in The Briefing, “and it is actually a distillation in truth of the approach taken by the French government and not only by France, but by many other Western nations as well.”  And then he states the problem:

the logic of Islam cannot accept the modern Western ideal of a secular state, a state indifferent to all matters religious. So whenThe Economist writes that France has done its very best to offer Muslims what they describe as a hard secularist bargain and that is, again, to accept the religious neutrality of the state and then be as free to practice their religion as any Catholic, Protestant, or Jew, that’s a hard secularist bargain that the Islamic State considers as an ample justification for attack rather than acceptance. The Islamic State isn’t going to accept any secularist bargain; just look at the statement [that] came after the attacks when they took responsibility, identifying France, one of the most secular nations on earth as a Crusader state and identifying those who are in the Bataclan listening to the rock concert as idolaters.

Now to The Economist’s analysis of the problem the world is facing: 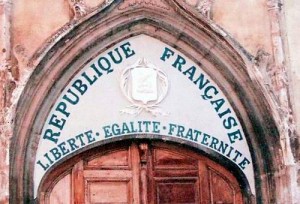 Europe’s democracies are standing united in the face of the nihilist terror which struck the heart of the continent on November 13th. With no fear, this time, of alienating patriotic voters, David Cameron managed a few words of French as he expressed his solidarity with the French people.

Even before the latest attacks, it was clear that the leading governments of Europe faced broadly the same dilemma. Within the large and growing Muslim communities which every European state now hosts, a minority is attracted by the cause of violent extremism, at home or abroad. The challenge is to keep that minority small and make sure that the rest of society, including the rising generation of Muslims, plays its part in this.

But in their approaches to this problem, European states have always had differences, often robust ones. At least in pre-9/11 days, French security chiefs used to refer scathingly to “Londonistan” because of the British capital’s willingness to harbour Islamist opponents of secular regimes, like the one which usurped power in Algeria.

There are differences of ideology as well as practice. Like America, only a bit more so, the French republic has a specific set of founding principles and it expects all citizens to accept them, however diverse they may be in other respects. It is agreed that one of the purposes of universal education is to inculcate those ideals. That is in sharp contrast with the British ideal of multiculturalism. To French eyes, it seems that Britain has been too lax in allowing immigrant sub-cultures, like the Asian Muslim enclaves of northern England. The existence of British schools (whether private or within the state system) where the ethos is that of ultra-conservative Islam can seem astonishing to observers from France, or from other European states where education is more centralised.

Britain now acknowledges that multiculturalism has gone too far, especially in education, but in a country that lacks a written constitution, there is uncertainty over what common denominator citizens and schoolchildren should be asked to accept. Whatever answer is found, it will not as demanding as the French approach. In Britain, the decade-old French law that bars headscarves from schools seems like an infringement of liberty. When Jack Straw, the former foreign secretary, said he preferred Muslim visitors to his office not to wear full face-veils, he was denounced as grossly insensitive by fellow Labour politicians. That sentiment is still widespread.

Not only is each European country different, each one is changing at a different pace and in a different direction. In contrast with secular France, post-war Germany has always had a lot of religious education, Protestant and Catholic, in its school system. Now there is increasing provision for Islam; what will happen after the arrival of more than a million refugees, mostly Muslim, is anybody’s guess. The Netherlands used to be generously multicultural but a sharp reaction set in after the murder of Theo van Gogh, a film-maker, by a Muslim fanatic in 2004, and the effects are still palpable.  Continue reading