Posted By Marsha West on June 5, 2016 in Christian Mysticism, Discernment, Women and the Church
Share

Women are being urged to attend yet another women’s event.  One of the organizers is Andrea Helton. Ms Helton supposedly received a word from the Lord over coffee with her mama telling her to organize an ecumenical gathering for women.   Seth Dunn isn’t buying that God spoke directly to Helton.  In his blog post over at Pulpit & Pen he reveals why we should think twice before believing that certain people are receiving direct divine revelation from God.  He wonders: “If [the organizers] heard from God and God himself ordained the specifics of this event, can anything taught there be doubted?”  He raises a good point!

Something else Dunn points out is that a large number of women will attend the event that haven’t heard God whisper to them about anything, ever, even though they read/study their bibles and pray regularly. He inquires: “How come more of God’s people aren’t getting these visions and revelations? For those who do get them, is it fair to doubt these visions?” 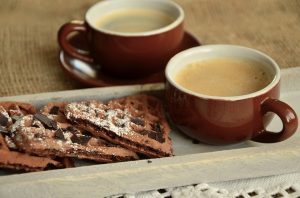 “As I enjoyed sipping on coffee with my mama this word began to surface over and over in my mind. … The word He gave me was this: Overflow.”

“Let’s cross denominational lines and simply be the bride of Christ together.” Andrea Helton, Enlightened Hearts

One of the newest evangelical women’s ministries on the block is Enlightened Hearts out of Cartersville, GA.  The organization is closely associated with the First Baptist Church of Cartersville and counts church members among its leadership.  Its most prominently featured teacher is native North Georgia, Tess Womack.  According to Tess’s testimony, she “experienced life-altering healing and revival” while under the teaching of a Beth Moore Bible study.  Perhaps taking a cue for Moore, the Enlightened Hearts ministry has recently claimed direct divine revelation from God concerning one of their upcoming events.  The name of this event is “Overflow.”

Enlightened Hearts team member, Andrea Helton, who is featured prominently at FBC Cartersville as a singer on its worship team, disclosed on the ministry’s blog that God whispered the theme of upcoming “Overflow” event to her.  Helton wrote,

“Three weeks ago this coming Thursday I heard a whisper.  As I enjoyed sipping on coffee with my mama this word began to surface over and over in my mind.  More than even hearing it, I knew the vision for it.  The Lord had been preparing me that He had something specific in mind for this summer.  I just had no idea what it was.  So I was waiting. The word He gave me was this: Overflow. The vision: Women meeting together this summer to boast in the overflow of all that God is currently doing in their lives.”

According to Helton, she received “affirmation” of her word from the Lord from the rest of the Enlightened Hearts team.  She wrote, “For 5 women to instantly agree and sense (God’s) direction is no small feat.”  (Does it, in fact, take some kind of unusual miracle for five friends from the same local church, two of whom are cousins, to agree on the plans for a church event?)  Helton has quite boldly proclaimed that the plans of the event are nothing short of the “mastermind” work of God Almighty.  Helton is clear that the idea for “overflow” was not her own but that of the Sovereign Creator of the Universe. ”

What does this imply about the event itself and the teaching to take place there?  Are these women prophets?  If they heard from God and God himself ordained the specifics of this event, can anything taught there be doubted?  Can the church that hosts it be anywhere but the place to be in God’s world during June 2016 regardless of one’s denomination? (Denomination, not sex, it’s just for women….not men, nothing has heretofore been whispered into the hearts of local prophets for Catersville’s Christian men folk).

I imagine that many of the ladies planning to attend this event have never heard a whisper from God about planning a special event, despite having spent their lives in prayer, church attendance, and Bible study.  As a grizzled veteran of the discernment blogging game, what I see from Enlightened Hearts seems more like the marketing machinations of Pentecostal-leaning book-sellers and conference speakers than the direct, divine revelation with which God has blessed His church.  Buzzwords like “vision” make me suspicious.  How come more of God’s people aren’t getting these visions and revelations?  For those who do get them, is it fair to doubt these visions?

Remember, when denominational lines are crossed, doctrine is studied lightly.  Subject matter must be watered down as to attract every type of woman: from Holy Ghost Holy Rollers to frozen and chosen Presbyterians.  I’m not sure what the leadership behind Enlightened Hearts is cooking up for this new ministry but I am almost certain that God is not revealing marketing plans directly to them over coffee.  I write this not to doubt the power of God but because I have compassion for the hearts and minds of local women.  I’ve heard the tale of one too many beleaguered Beth Moore disciple who felt inadequate because she didn’t get special revelation from God…the revelation that the book sellers and conference speakers seem to get almost weekly.  To these women I say, “Don’t feel inadequate, these self-proclaimed teachers aren’t getting anything you aren’t getting.”  I want to encourage you.  Don’t forget what Paul wrote to the church at Corinth:

“Do you not know that you are a temple of God and that the Spirit of God dwells in you?”

All Beth Moore critiques in one place–Elizabeth Prata

See our White Paper on the New Age Mysticism