October 31st marks the 500th anniversary of the revolt against the abuses and totalitarian control of the Roman Catholic Church known as the Protestant Reformation. To help us understand why there still remains a very wide divide between Protestants and Catholics, pastor and best-selling author Kevin DeYoung lays out a few of the main points that cause the separation so that those who are unfamiliar with RCC theology will know why there still remains a wide divide, and never the twain shall meet. He writes: 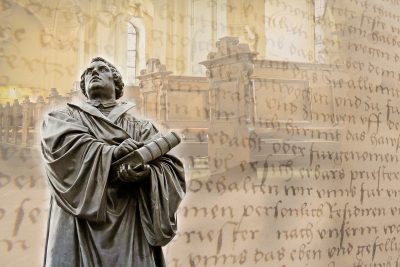 Ask a serious Protestant today what is the biggest threat to orthodox Christianity today, and he might mention cultural hostilities, the sexual revolution, or nominalism in our churches. But if you would have asked a Protestant the same question a hundred years ago, he would have almost certainly mentioned the Roman Catholic Church. Until fairly recently, Protestants and Catholics in this country were, if not enemies, then certainly players on opposing teams.

Today, much of that animosity has melted away. And to a large extent, the thaw between Protestants and Catholics has been a good thing. Sincere Protestants and Catholics often find themselves to be co-belligerents, defending the unborn, upholding traditional marriage, and standing up for religious liberty. And in an age that discounts doctrine, evangelical Protestants often share more in common theologically with a devout Roman Catholic steeped in historic orthodoxy than they do with liberal members of their own denominations. I personally have benefited over the years from Catholic authors like G. K. Chesterton, Richard John Neuhaus, and Robert George.

And yet, theological differences between Protestants and Catholics are still wide and in places very deep. As the 500th anniversary of the Reformation draws near, it’s important to be conversant with some of the main issues that legitimately divide us, lest we think all the theological hills have been laid low and all the dogmatic valleys made into a plain.

Below are a few of the main points that still separate Catholics and Protestants. Of course, many Roman Catholics may not believe (or even know) what their formal theology states. But by seeking to understand official church documents we can get a good idea of what Catholics are supposed to believe and see how these differ from traditional Protestant beliefs (unless otherwise noted, quotations are from the Catechism of the Catholic Church).

Since Vatican II, the Catholic Church has softened its stance toward Protestants, calling them “estranged brothers.” Nevertheless, to be a part of the church in its fullness one must be immersed in the Roman Catholic system of sacraments, orders, and under the authority of the Pope. “Fully incorporated into the society of the Church are those who . . . are joined in the visible structure of the Church of Christ, who rules here through the Supreme Pontiff and the bishops.”

Further, the Pope is considered infallible when he speaks ex cathedra (from the chair); that is, when he makes official doctrinal pronouncements.

The Catholic Church also has seven sacraments instead of two–Eucharist (or Lord’s Supper) and baptism like Protestants, and then penance, holy orders, marriage, confirmation, and last rites.

Catholics have a larger biblical canon. In addition to the 66 books in the Protestant Bible, Catholic Bibles include the Apocrypha, with books like Tobit, Judith, 1 and 2 Maccebees, Sirach, and Baruch. Catholic teaching also elevates tradition more than Protestants do. Granted, many evangelicals suffer from ignoring tradition and the wisdom of the past. But Catholic theology goes beyond just respecting the past; it sacralizes it. “Both Scripture and Tradition must be accepted and honored with equal sentiments of devotion and reverence,” the Catechism states.

Likewise, the Magisterium has the authority to make definitive interpretations. “The task of giving an authentic interpretation of the Word of God, whether in its written form or in the form of Tradition, has been entrusted to the living, teaching, office of the Church alone . . . to the bishops in communion with the successor of Peter, the Bishop of Rome.” The issue of authority continues to be the biggest practical divide between Protestants and Catholics. Continue Reading

SEE OUR WHITE PAPER ON THE ROMAN CATHOLIC CHURCH

Who will go into the ‘furnace of fire’ Jesus warned about?
Wm. Paul Young Teaches New Age Lie About Separation on TBN