Posted By Marsha West on December 4, 2017 in Discernment, Evangelical
Share 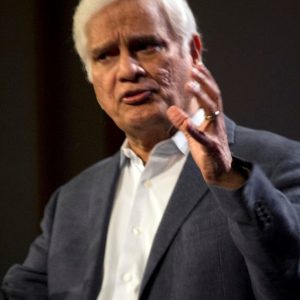 Before we get to Christianity Today’s story, you should know that Ravi Zacharias does not hold a doctorate in anything (we reported on this here). He has honorary doctorates. An honorary doctorate is not the same thing as an earned Ph.D.  Zacharias has not written a dissertation nor has he passed an oral defense. He has a master’s degree. Period. Thus, we should not refer to him as “Dr.”

It is time for Mr. Zacharias to come clean, stand tall, and admit that he’s not a doctor of anything. But, as you will see, he isn’t willing to do that.

Elizabeth Prata reminds us that “Even though there are some towering men of the faith, we must continue to do our duty and test all things against scripture. No one is immune from potential apostasy, error, or sin.”

As for the sexting allegations, neither Zacharias or his accuser can answer further questions about the matter due to the court settlement’s confidentiality agreement.

Ravi Zacharias built his career defending the Christian faith. Now the famous apologist is defending his own reputation.

Today, Zacharias and his eponymous Ravi Zacharias International Ministries (RZIM) released their first statements specifically addressing a personal lawsuit involving a married woman who sent nude photos to the popular author and speaker, as well as accusations that Zacharias has misled supporters by inflating his credentials in his RZIM biography.

“I have learned a difficult and painful lesson through this ordeal,” Zacharias said. “I failed to exercise wise caution and to protect myself from even the appearance of impropriety, and for that I am profoundly sorry. I have acknowledged this to my Lord, my wife, my children, our ministry board, and my colleagues.”

An Indian-Canadian convert to Christianity, Zacharias has become one of the best-known living apologists and has authored dozens of books on faith. With almost $24 million in US revenue last year, RZIM sponsors dozens of itinerant preachers and apologists (such as the late Nabeel Qureshi); puts on conferences for Christian leaders; and holds forums on college campuses.

Last month, Zacharias settled a lawsuit with a Canadian couple he claimed had attempted to extort him over messages he had exchanged with the wife.

The federal lawsuit—which was filed by Zacharias, not the couple—alleged that his “friendly correspondence” with the wife evolved over the course of 2016 to her sending him “unwanted, offensive, sexually explicit language and photographs.” In April 2017, the couple sent a letter through their attorney demanding millions of dollars in exchange for keeping the messages a secret.

“In the alternative of protracted and public litigation, [the couple] will sign a release of you and your church and ministry in exchange for a certified check in the amount of $5 million,” stated the letter from the Bryant Law Firm.

The couple first met Zacharias in October 2014 at a conference in Ontario, and they kept in touch over email and BlackBerry Messenger. In Zacharias’s telling, the wife kept crossing boundaries in their communication, even after he asked her to stop and blocked her messages.

Zacharias, who has been married for 45 years, turned down the woman’s offer to treat his back pain and her request to accompany him on a mission trip to India. According to his August 2017 lawsuit, she eventually “began expressing her love for [Zacharias], and then began making sexually suggestive statements.” She sent him photos of her family; then of herself; then of herself in “very scanty clothing;” and finally, of herself nude.

“Let me state categorically that I never met this woman alone, publicly or privately,” said Zacharias in Sunday’s statement. “The question is not whether I solicited or sent any illicit photos or messages to another woman—I did not, and there is no evidence to the contrary—but rather, whether I should have been a willing participant in any extended communication with a woman not my wife.

“The answer, I can unequivocally say, is no, and I fully accept responsibility,” he said. “In all my correspondence with thousands of people in 45 years of ministry, I have never been confronted with a situation such as this, and God and my family and close friends know how grieved I have been.”  Continue reading

On discerning Ravi Zacharias: It’s time to say what needs to be said by Elizabeth Prata

Is Arminianism Heresy? Part I
A Pox Upon Our House: Three Chronic Diseases Plaguing Women’s Ministry