Posted By Marsha West on August 3, 2015 in Discernment
Share 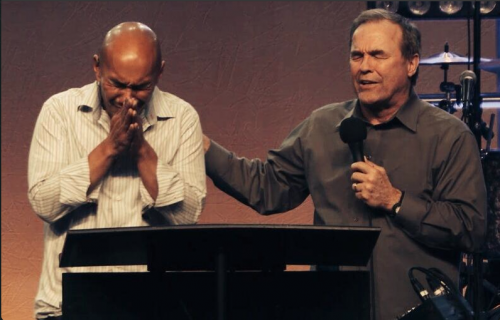 In 2013 Francis Chan spoke at the International House of Prayer (IHOP) apostasy fest Onething: Until the Fame of Jesus Fills the Earth annual event brought to us by false prophet Mike Bickle.  Many well intentioned bloggers alerted Chan to the bizarre goings on at IHOP but, sadly, their warnings went unheeded.

In 2014 I penned a piece entitled The Prosperity Priestess and the Pied Piper of IHOP to inform readers that Word of Faith/Prosperity Preacher Joyce Meyer intended to join forces with Mike Bickle at Onething 2014.  (Meyer ended up pulling out of the event at the last minute because of “unforeseen personal circumstances.”)  In the referenced article I included a bit about Francis Chan’s professed love for Mike Bickle:

It’s important to note that last year Reformed pastor; author; conference speaker Francis Chan spoke at Onething where he declared “I love Mike Bickle.” Chan took a lot of heat for agreeing to speak at the conference. When friends and fans urged him to decline the invite, he admitted that he didn’t know much about Mike Bickle and IHOP so,

I kinda went on the Internet and started looking things up.

Whatever he found caused him to fall in love:

I go, man, there’s a lot of great things going on [at IHOP]. And today was the first time I ever met Mike Bickle. And, I love that guy. I do. And Mike knows – we talked about this – you know, there’s people who told me not to hang out with him.

Like, you know, words like “creepy” came up. And yet, I get to know this guy and I’m going, “Man, I love his heart. And I just want to publicly say I love Mike Bickle. (Source)

As you can see, Chan professed his love for the sort of person Jesus referred to as a ravenous wolf. (Mat. 7:15)

What Francis Chan failed to turn up in his investigation is that Mike Bickle has led countless young people astray. He’s a sort of a Pied Piper to those who journey to Kansas City from all over the globe to be a part of something “significant.” Once there, they stay for days, months…even years. You’ll find them in the prayer room praying. Prayer “led from a stage full of musicians and readers chanting repetitive phrasings of faith” goes on ’round the clock.

The false prophet has filled the young sojourners’ heads with untruths such as “an elite end-time church defeats God’s enemies, and Jesus is ‘held in the heavens’ until it happens.” So they most “go forth and make ready.”

Now I learn from John Lanagan that Francis Chan will be speaking at Onething 2015.  He’ll be there with several IHOP apostates as well as evangelist Reinhard Bonnke, and one of Bethel Church’s music family, Amanda Cook. More speakers will be added.

Even after receiving a lot of flak for speaking at the 2013 event, Chan once again failed to do a background check on IHOP. Either that or he checked it out and has no problem with IHOP’s affiliation with the New Apostolic Reformation (NAR) aka Dominionism and Bickle’s affinity for unbiblical contemplative/centering prayer.

Over the years what is deemed the “signs and wonders” movement has had many names to include Third Wave; Kingdom Now; Latter Rain; Joel’s Army; and Manifest Sons of God.  It matters not what they call themselves; what matters is what they believe and teach – their theology.  I’ve provided several links for those who wish to know more about the NAR’s warped theology, as I don’t have the space to do that here.  As you become acquainted with the dominionist movers and shakers (literally) and learn of their plans for this planet, you’ll understand why discernment bloggers have been sounding the alarm. 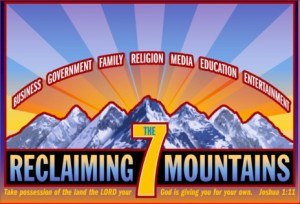 In a nutshell, the NAR has been working non-stop and pretty much unhindered for decades in their effort to transform society into their vision of the kingdom of God on earth. Their aim is control. In order to accomplish what they’ve set out to do, they must first gain control of the “Seven Mountains,” or “Seven Spheres” of society.   These spheres are:  1) Arts and Entertainment; 2) Business/Economy; 3) Education; 4) Family; 5) Government; 6) Media; 7) Religion.  Its leaders teach that as the anointed ones rid the world of evil, things will get better and better and then Jesus Christ will return to rule and reign over His earthly kingdom.

In the early years, when it was known as the Latter Rain, it was a fringe movement that most Christians didn’t know about and those who did paid little attention to.  But the NAR is no longer on the fringe.  In recent years its leaders have wormed their way into the seven mountains of society.  Through their worldwide mission outreach,  the movement that introduced us to breaking down demonic strongholds, casting out demons, healing the sick and raising the dead and other so-called “signs and wonders” has become mainstream.  Who’s to blame for the mainstreaming of NAR apostasy?  The blame lies squarely with our Christian leaders, clergy, authors, entertainers, so-called Christian media outlets, blogs, and last but not least, pro-family leaders who profess a belief in Jesus Christ.   Many of the people Christians look to for leadership and guidance are not Bible believers and a large number of them are involved in outright apostasy, even heresy. So how can they possibly have spiritual discernment?

What exactly is discernment?  According to blogger Tim Challies:

Discernment is the ability to properly discriminate or make determinations. It is related to wisdom. The Word of God itself is said to discern the thoughts and intentions of one’s heart (Hebrews 4:12).

A discerning mind demonstrates wisdom and insight that go beyond what is seen and heard. For example, God’s Word is “spiritually discerned.” To the human mind without the Spirit, the things of God are “foolishness” (1 Corinthians 2:14). The Spirit, then, gives us spiritual discernment. (Source)

Getting back to addressing Pastor Chan’s participation in Onething 2015.  Many in the Christian community wondered about his discernment or lack thereof, when he spoke at the 2013 event — there was a big brouhaha over it.  Even so he has agreed to return to the scene of the crime, so to speak.  It seems impossible that researching the NAR and Mike Bickle would result in anything other than an ample understanding of the highly unbiblical nature of the movement.  So it’s obvious that he hasn’t done the research…. or perhaps he has.  Inquiring minds want to know.  Finally, it’s concerning that during his talk in 2013 he joked about warnings from friends and discernment bloggers when he snickered, “there’s people who told me not to hang out with him [Bickle]” But even worse than that, hearing a highly regarded Christian leader proclaim his love for a false prophet was upsetting, to say the least.

Hopefully Pastor Chan will do as Joyce Meyer did in 2014 and cancel his speaking gig.

Deception in the Church

CARM lists some of the main offenses of IHOP:

Rob Bell returns: His thoughts on creation, modern “Kingdom of God”
Planned Parenthood and the Barbarity of America