Posted By Amy Spreeman on April 27, 2016 in Progressive Christianity
Share
The following is posted by Pastor Jim Jenkins over at Herescope:

“It’s entirely possible to look at something so long that you can’t really see it anymore. For years I have been calling people back to simple faith in the inerrancy of God’s Word. I’ve been patronized, mocked and more times than not, simply ignored. 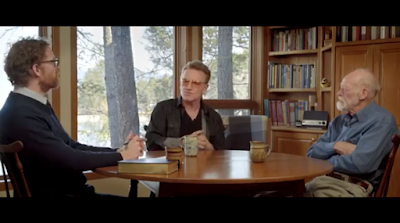 I completed my doctorate at Fuller Seminary at the height of the Church Growth movement. I was exposed to all the marketing influence, the obsession with numerical growth of churches—and it was there that I was first introduced to the term “Progressive Christian.”

We were required to read the book Marketing the Church by George Barna. Some notables at Fuller at the time were C. Peter Wagner, Bob Logan, Carl George, and Eddie Gibbs. The message that permeated the core of the Doctor of Ministry Degree program was that the Church needed to be run as a business, and that the message needed to be contextualized against the backdrop of the culture.

Today Fuller Seminary rolled out its inaugural video of a new media site FULLER studio. It is a 20-minute piece featuring Eugene Peterson, author of The Message Bible which sold 17,000,000 copies and the rock star Bono. They are discussing their joint affinity for the Psalms. Accompanying the video is the above picture of Bono with the Petersons at their home in Montana.[1] Bono is lifting his index finger. Many believers would say, “Oh, I didn’t know Bono was a Christian.” 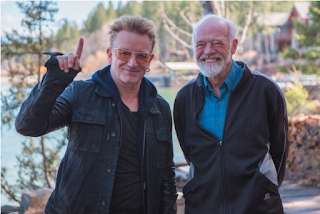 Here is another picture of Bono that more accurately depicts his view of Christianity He is sporting a headband with the COEXIST motto.

I saw a video of one of U-2’s concerts in which Bono is leading the thousands of fans in a song and he begins to speak almost in a whisper, “Jesus, Mohammed, Buddha all the same. Jesus Mohammed, Buddha all the same.” He is pointing with the index finger to the headband. His idea of One Way means that we are all worshipping the same God. One Christian reporter saw another concert in which Bono offered a variation on the same theme…”
READ THE REST HERE

Does U2’s Bono, a professing Christian, believe the Bible? By Marsha West