C. S. Carmichael of Sacred Sandwich has written an exposé on Transhumanism that is an important read.  Carmichael gives the definition right off the bat (so we won’t) and reveals the reasons we should feel uneasy about some of the things science has accomplished in the field of artificial intelligence.  It is mind blowing stuff, brethren.  He begins with Scripture: 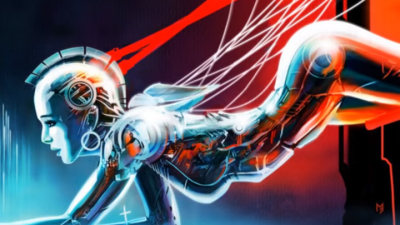 “For My thoughts are not your thoughts, Nor are your ways My ways,” declares the Lord. – Isaiah 55:8

“You thought that I was just like you; I will reprove you and state the case in order before your eyes.” – Yahweh, Psalm 50:21

“Professing to be wise, they became fools, and exchanged the glory of the incorruptible God for an image in the form of corruptible man…” – Paul, Romans 1:22-23

Since many people in America today, including some Christians, clamor for all things fantastical in their personal search for augmented meaning, instead of resting in God’s pure word and the attending Holy Spirit to guide their spiritual understanding, it would be prudent for thoughtful believers to consider this current pathway of metaphysical delights, its brash direction, and where it will eventually end. Indeed, the signposts on this broad road have already been erected, if only Christians enthralled with inventive speculations would stop and see the illumined markers of its ultimate destination: Transhumanism.

What is Transhumanism? According to Max More, a futurist and early architect of this burgeoning belief concept:

“Transhumanism is a class of philosophies of life that seek the continuation and acceleration of the evolution of intelligent life beyond its currently human form and human limitations by means of science and technology, guided by life-promoting principles and values.”

Transhumanism (abbreviated as H+ or h+) may sound like the plot of a Utopian science fiction movie, but it has stepped right out of the imaginary realm and become an influential global movement. It is a real and rising school of thought grounded in reason and science that often slides into metaphysical language about “transcendence” because it concerns the things of eternity and immortality. It resolutely seeks to birth an advanced species of humankind, a literal hybrid of man and machine, and is closely associated with Posthumanism, which refers to the desire to be a person or entity that exists in a state beyond “being human.” As one website describes this aspiration:

“Many transhumanists wish to follow life paths which would, sooner or later, require growing into posthuman persons: they yearn to reach intellectual heights as far above any current human genius as humans are above other primates; to be resistant to disease and impervious to aging; to have unlimited youth and vigor; to exercise control over their own desires, moods, and mental states; to be able to avoid feeling tired, hateful, or irritated about petty things; to have an increased capacity for pleasure, love, artistic appreciation, and serenity; to experience novel states of consciousness that current human brains cannot access. It seems likely that the simple fact of living an indefinitely long, healthy, active life would take anyone to posthumanity if they went on accumulating memories, skills, and intelligence.” – whatistranshumanism.org

The catalyst for this transhumanistic and posthumanistic agenda is, quite simply, the idol of human imagination and all the ideas, visions, and creations that the “evolving mind” can muster in godlike fashion for the betterment of the world. In essence, it is plain old humanism run amok within the Fourth Industrial Revolution; and it has a definite spiritual agenda: replacing God with the golden calf of human ingenuity and technology, a god who brings the promise of sinlessness and eternal life.

Sadly, however, such thinking is not only prevalent in the atheistic techno-geek circles of the Googlesque religion, but it has also seeped into our susceptible postmodern Christianity without being noticed. The transhumanistic philosophy, in fact, is quite similar to what some Christians are endeavoring to do in their vain pursuits within the realm of their own imaginations to create new mythologies that spiritually excite them, even if they spill into neo-paganism or Gnosticism. Viewing the faculty of imagination as an essential attribute of their image-bearing of God, these Christian “Sub-creators” frequently insist that only by a “redeemed” or “sanctified” imagination can a believer achieve a higher level of spiritual understanding and fulfillment. It is an idea that has captured, well… their imagination.

This isn’t an isolated notion in the Church, either; its popularity has created a seismic shift in theology that has spawned countless books on the subject of the Christian imagination. A quick search on Amazon, in fact, yields at least two dozen books currently available that advocate the human imagination as one of the main elements of the imago Dei and how we should freely use that divine-like power. Strangely enough (or not so strangely), you can go back hundreds of years into the Church’s history and there is few if any orthodox scholars who recognized in the Bible such a specific theological premise as the one we see argued today in all its gnostic glory.

John Calvin’s sermon note on Deuteronomy 4:15-20, for example, is a scathing indictment of imagination and its man-made products. The evil, he asserted, stemmed from…  Continue reading

SEE OUR WHITE PAPER ON FUTURISM/TRANSHUMANISM

Hillsong’s Carl Lentz Tells Christians Labeling Him a Coward: ‘You and I Know a Different Jesus’
How to help indoctrinated cult victims break free