Posted By Marsha West on September 16, 2015 in Evil
Share
Got Questions has the answer: 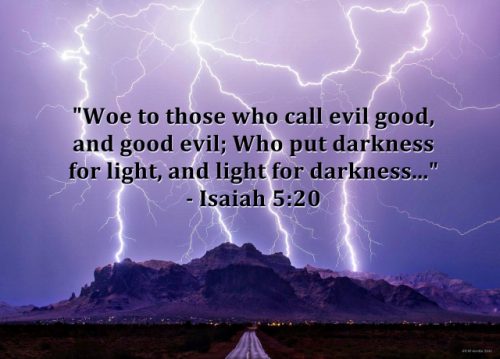 A dictionary definition of evil is “morally reprehensible, sinful, wicked.” The definition of evil in the Bible falls into two categories: evil against one another (murder, theft, adultery) and evil against God (unbelief, idolatry, blasphemy). From the prohibition against eating from the tree of the knowledge of good and evil in the Garden of Eden (Genesis 2:9), to the destruction of Babylon the Great (Revelation 18:2), the Bible speaks of evil.

For many centuries Christians have struggled with both the existence and the nature of evil. Most people would acknowledge that evil is real and has always had devastating effects on our world. From the sexual abuse of children to the horrific terrorist attacks on 9/11, evil continues to rear its ugly head in our own time. Many people are left wondering what exactly is evil and why does it exist.

The existence of evil has been used as a weapon by opponents of theism—and Christian theism in particular—for some time. The so-called “problem of evil” has been the subject of various arguments by atheists in an attempt to demonstrate that a God who is good simply cannot exist. By implying that God must be the creator of evil, God’s holy character has been called into question. There have been many arguments used to indict God as the cause of evil. Here is one of them:

The logic of this syllogism is sound. The conclusion follows logically from the premises. But does this syllogism demonstrate that God is the creator of evil? The problem with this argument is its second premise, that evil is something. For evil is not a thing; it is a lack or privation of a good thing that God made. As Christian philosopher J. P. Moreland has noted, “Evil is a lack of goodness. It is goodness spoiled. You can have good without evil, but you cannot have evil without good.”

Goodness has existed as an attribute of God from all eternity. While God is perfectly holy and just, He is also perfectly good. Just as God has always existed, so too has goodness as it is a facet of God’s holy character. The same cannot be said for evil. Evil came into being with the rebellion of Satan and subsequently entered the physical universe with the fall of Adam. As Christian apologist Greg Koukl has said, “Human freedom was used in such a way as to diminish goodness in the world, and that diminution, that lack of goodness, that is what we call evil.” When God created Adam, He created him good, and He also created him free.  Continue reading

One Response to What is the definition of evil?