Aimee Semple McPherson could put on a theatrical church services like nobody’s business. The flamboyant Pentecostal faith healer “helped drive the rise of a new mass media, celebrity culture” and became one of the most famous celebrities of her time. According to Costi Hinn of Equip the Saints there was a side to this woman that few are willing to tell.  Hinn, however, is willing to tell us her story.  One of the astonishing things he reveals is that “students of signs and wonders schools still flock to her gravesite in Glendale, California to lie on her tombstone and ‘soak’ in her anointing so they can operate in ministry as she once did.” This practice is called “grave sucking,” brethren. Watch this video. Some deluded people actually do this, as you will see.

So now to Costi Hinn’s troubling revelations about the Pentecostal prophetess who profited financially from fooling her fans.  He writes: 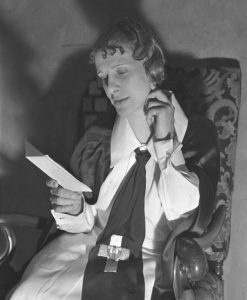 Sister Aimee, who was quite the entertainer, performed her messages with actors, costumes, elaborate stage sets and an orchestra.

On this date, September 27th, 1944, one of the most famous female faith healers in history died of an overdose from sleeping pills that sent shockwaves through the world. While she is known for her ecumenical work and for being the founder of the Foursquare denomination, it is her life and theology as a pastor that few ever stop to ponder. For better or for worse, this is a side of Aimee Semple McPherson’s story like you may have never read before.

As famous in her day as Babe Ruth, Aimee Semple McPherson loved the spotlight. She was flamboyant, theatrical, ecumenical, and had the slippery talents of today’s best politicians. Though she fought for many good things like putting Bibles in every grade school, and helping the poor in Los Angeles, her erroneous teaching set the stage for a whole new wave of confusing doctrines. She taught dangerously about salvation in regards to healing and tongues. According to her theology, speaking tongues was evidence that a person was a part of the “true church.”[1] Furthermore, she built herself up as a holy conduit of God Himself. When on a trip from Ireland to China she claimed that God had chosen her to change the course of church at the time by bringing His people back to Scripture. God is quoted as saying directly to her,

But behold, even as thou sawest the messenger’ of light come forth, even so have I chosen and ordained thee, that thou shouldst go forth, and clear away the debris and contamination, with which they have covered and obscured the light of My Word. I have chosen thee and called thee by name that thou should speak unto My people. Look not upon the pages that contain the theories of men, but upon the burning, flaming words of My Word as revealed and illuminated by the Holy Spirit which I have given unto you.[2]

Aside from the fact that God’s choice of words seems to bear an uncanny resemblance to the published version of the King James Bible, there is one important thing to be noted. If God did speak these words to her (which this writer does not believe), she directly disobeyed Him based on the fruit of her life and teachings. Instead of pointing people to God’s Word and “clearing away the debris and contamination,” her life and ministry became the debris and contamination.

After being widowed by Robert Semple at the young age of 19, she would later remarry an accountant named Harold McPherson and settle down in Providence, Rhode Island. Upon hearing a “voice” telling her to go preach, she abandoned her husband, and took her children with her to hit the road for ministry. Harold filed for divorce in 1921 after citing abandonment. She later married actor, and womanizer, David Hutton in 1931. However, due to his scandalous lifestyle the two divorced in 1934. While even faithful pastors sometimes experience marital collapse, the pastors like McPherson who claim direct communication from God are unable to explain how it is that such divinely infallible messages do not include some insight as to how they might make their marriages last! Would a true believer not experience progressive sanctification at a rate that would provide some level of improvement by the third opportunity at matrimonial success? Such a question is asked with the utmost sincerity.

In her final 20 years of life Aimee made her largest modern day contribution by founding her own denomination. She established the Foursquare Church to preach a version of the Gospel more akin with her own personal theology. “Foursquare” represents her belief that Jesus had four ministries that made up the “full Gospel.” Anything less was not the true ministry of Christ in her eyes. The four squares are: 1) Jesus is Savior 2) Jesus is baptizer (implies that He baptizes people with the Holy Spirit, evidenced with tongues) 3) Jesus is healer (implies that because of the cross, all can receive healing now) 4) Jesus as coming King.[3] Two of these things are exaggerated theologies that teach healing and tongues as some sort of guaranteed evidence or result of salvation. For McPherson to claim God gave her special revelation, then go and build a denomination based on her own personal theology is eerily similar to the way many divergent religions begin. This is certainly not typically how a biblically sound denomination establishes itself. Such practice could perhaps be argued to be a segmented Gospel message at best, and at worst, another Gospel altogether (Galatians 1:6-12).

Like today’s faith healers, she was always surrounded by controversy. Aside from her divorces, lavish lifestyle, and public family disputes, she made headlines for other things as well. There was her mysterious disappearance in 1926 that was alleged to be linked to an affair, though she claimed she was kidnapped. There were also numerous financial controversies because she lived so lavishly as a type of earthly reward for her supernatural work. She had a chartered plane to ensure she always made it to healing services in style, a lavish villa in Lake Elsinore, California, [4] and was not popular with the press for her use of church funds to support her lust for such a lavish life. With her air-carriage, castle, and cash flow, Aimee had built her own royal empire to be a model for future prophetesses looking to profit on charismatic hopefuls.

She used every trick in the book in order to make the healing service presentations memorable. She hired a set building team to create an awe-inspiring atmosphere, and lined up wheelchairs and crutches along the platform to show off that people had been “healed.” Like a true showman, she built the service in such a way so it always came to a climax, in which people would make emotional responses to be healed, saved, or “filled with the Holy Ghost.” The supposedly healed people would be flaunted across platforms and everyone would be left in awe. Audio records prove that her voice, tone, rhetoric, service order, and strategies are closely linked to Kathryn Kuhlman (who would come next), and Benny Hinn (who would come later). She too wore a white outfit when preaching, and used media to get her message out to the masses. She would even tell the listener to place their hands on the radio set to receive their healing[5] like faith healers do today. Her power was said to be from God but the evidence of her life proves that God’s power may not have been at the root of her ministry. Her storyline resembles modern day celebrity tabloid controversy more than the story of a woman of God.  Continue reading

SEE OUR WHITE PAPER ON THE WORD OF FAITH MOVEMENT

Taizé Worship – Growing in Popularity, But Roots Are in Mystical Monasticism
“An Act of Pure Evil” — Searching for Meaning in Las Vegas