Most people are unaware that charismania exists within the Roman Catholic Church. But it does.  The movement is growing and for good reason. Bud Ahlheim informs us that because the RCC was losing millions of adherents to what they deem apostate Protestantism the church’s hierarchy took the advice of Brazilian Catholic priest Marcelo Rossi who urged them to incorporate some of the features of evangelical churches into a more “modernized, spiritualized, and experientially emphatic Roman Catholic church. The primary feature Rossi mimicked was the charismatic element.”

The Catholic Charismatic Renewal (CCR) will be celebrating fifty years of the movement this month, which is “not cause for celebration, but for lamenting,” says Ahlheim.  In the following blog post over at Pulpit & Pen, he takes a look at the CCR: 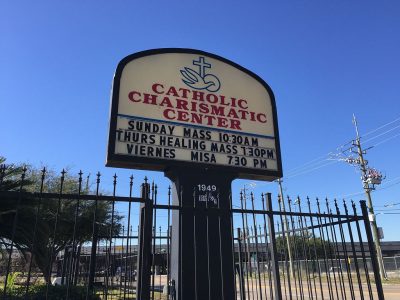 No, I’m not celebrating charismania’s foothold in Roman Catholicism. But some of the adherents to apostate Roman theology are. (Please also read Why We Don’t Consider Catholics To Be Christians … in as polite and simple terms possible for more on Roman Catholicism)

According to a recent story in Religion News Service, “This month marks the 50th anniversary of the birth of the most important Catholic lay movement of the past century.”

That lay movement is called the Catholic Charismatic Renewal. And, just like its Pentecostalism forebear, the movement was birthed in the U.S.A.   Though adherents and proponents of it also claim a lineage to the days of the first-century church, charismania of any flavor is a recent phenomenon. Its lineage doesn’t nearly go back two millennia. Barely a century old, charismania was birthed in America in 1900 in Topeka, Kansas. (For more on it, you could read THIS.)

The Catholic version of charismania – CCR – dates back to February 1967 when students attending a prayer retreat “led by two Duquesne University professors” claimed to have experienced “baptism in the Holy Spirit.”

(“Baptism in the Holy Spirit,” in charismatic lingo, is an experience that indicates one’s reception of supernatural, miraculous spiritual gifts. This “experience” is often manifested by “speaking in tongues,” a behavior wrongly claimed to be the same as found in the Pentecost events recorded in the Book of Acts.  The tongues in Acts were actual foreign languages, not mindless, ecstatic gibberish.  Paul discusses the gifts of the Spirit further in 1 Corinthians 12-14. Authentic baptism in the Holy Spirit, however, occurs for each believer at the time He sovereignly regenerates them. It occurs one time. The experience of salvation and the corresponding indwelling of the Spirit is expressed nowhere in Scripture as exhibiting tongues or other supernatural behaviors, as these lauded features found in the Book of Acts have not been legitimate for nearly two millennia now.)

The Pentecostalism of Catholicism was quick to spread, initially through other Catholic or heavily Catholic universities, such as Notre Dame and Michigan State. But the charismatic behavior of the CCR, like its evangelical counterpart, became a mainstay of toxic religious exports from America to the world. The CCR would combine charismania with the dangerous and defective doctrinal teachings of Rome.  Within the evangelical flavor of charismania, the export is primarily clothed in the Word-Faith, prosperity gospel, with upwards of 91% of Latin-American believers adhering to this charlatan-enriching, but soul-damning “other” gospel.  But the CCR found a particularly receptive audience in Latin America and maintains a substantial, though somewhat declining, presence there now.

Clearly, the bulk of what passes for “Christianity” in Latin America is a “pick your poison” version of either the false, damning gospel of Rome or the false, damning gospel of the prosperity gospel.  Both promise spirituality cloaked in the enormously appealing emotional garb of charismania.  Such a scenario prompted John MacArthur, President of the Masters Seminary to broadcast this YouTube video focusing on the need for the true Gospel in Latin America.