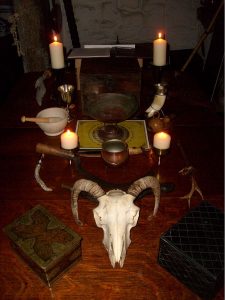 The headline “I put a spell on you, Mr. President” recently appeared in the Los Angeles Times. The story by novelist Diana Wagman was deemed newsworthy enough for the Time’s Op-Ed page. In her piece, Wagman reveals that she, along with other no-trumpers around the world, have put a “binding spell” on Donald Trump. Wagman’s happy to report that it seems the spell is working.

“I don’t believe in the devil,” she admits, “but I do believe our country has gone to hell, and I am willing to try anything to save us.” Trying anything means she’s willing to join forces with those who practice the magical arts, to include shamans, witches, and warlocks.  These days the preferred term for witch is Wiccan. It matters not what witch’s call themselves. A witch by any other name is still a sorcerer who is hooked by the occult.

The Left is desperate to remove Donald Trump and “all those who abet him” from office, even if it means locking arms with the devil (he does exist) to accomplish their goal.  Ms Wagman must not have heard that New Apostolic Reformation (NAR) “prayer warriors” have tried their hand at “binding” for decades, only they bind demons who inhabit those who, they believe, are demon possessed.  I don’t want to get too far afield, but “Christians” who have embraced the NAR cult have tried spiritual warfare prayer on Barack Obama. For all their attempts to bind the demon of…whatever you want to call it (NAR gives them titles like “demon of lust”), Obama still managed to remain in power for eight years. So much for spiritual warfare prayer warriors possessing the power to bind demons. Now the Left is having a go at binding, not demons, but conservatives they loathe.

The “Spell to Bind Donald Trump” was first performed in February. I joined in April. I followed the clear, easy instructions posted online (just Google “Bind Trump” or check out the #Bind Trump Facebook page).

(Our White Paper on Occult-Sorcery is a must read)

Hate drove Diana Wagman to participate in this craziness. Listen to the extremes Trump-haters will go to in their effort to thwart his agenda:

I found an orange candle in a box of multicolored ones we use for our Hanukkah menorah. I printed the required tarot card off the Internet and propped it up. I cut an unflattering photo of POTUS out of the newspaper, and I burned it while chanting the words of the spell.

My husband was watching “SportsCenter” in the other room. I stood at the kitchen sink. It took less than five minutes. More time was required to get the components together, although that wasn’t difficult — no eye of newt or boiling cauldron required.

Tarot cards…chants…spells? Hard to imagine that in their desperation to oust a sitting president, a large number of liberals would actually participate in an occult ritual.  But they have. Makes one wonder what these people will come up with next. A Trump voodoo doll, perhaps? Oh wait!  You can purchase a Not My President Donald Trump voodoo doll with pins on Amazon.

I’ll close with what Almighty God says about those who take part in the magical arts:

There shall not be found among you anyone who burns his son or his daughter as an offering, anyone who practices divination or tells fortunes or interprets omens, or a sorcerer or a charmer or a medium or a necromancer or one who inquires of the dead, for whoever does these things is an abomination to the LORD. And because of these abominations the LORD your God is driving them out before you. You shall be blameless before the LORD your God, for these nations, which you are about to dispossess, listen to fortune-tellers and to diviners. But as for you, the LORD your God has not allowed you to do this.  Deuteronomy 18:10-14 (emphasis added)

Now check out our White Paper on Occult-Sorcery