The church has “functionally replaced the Five Solas of the Reformation with pragmatic, and often idolatrous, solas of our own making,” says Bible study author, speaker and blogger Michelle Lesley. I’d venture to say that a large number of professing Protestants have no clue what the five solas are. Not only that, many Protestants are unclear what the Protestant Reformation was all about. Why, they wonder, does an event that happened 500 years ago matter today?

According to Michelle Lesley, the Protestant Reformation not only matters, it was a really big deal.  So she’s taken the time to fill us in on the events leading up to the schism from the apostate Roman Catholic Church that was sparked by a humble German monk….who changed the course of religious history. Lesley also reveals the Christian’s instructions for life and godliness. She writes: 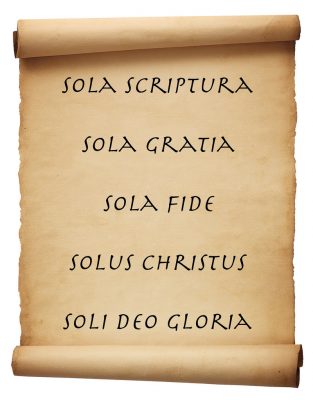 This year marks the 500th anniversary of the beginning of the Protestant Reformation. October 31, 2017 will commemorate the date in 1517 when Martin Luther famously nailed his 95 theses – a list of grievances against the Catholic church for unbiblical doctrines and practices – to the door of Castle Church in Wittenberg, Germany.

Luther’s calls for reform spread quickly throughout Europe, inspiring the likes of church fathers Ulrich Zwingli (Zurich), John Calvin (Geneva), and John Knox (Scotland) to join the effort in their own locales. As they worked to address the issues raised in Luther’s document, these men codified what we know today as the “Five Solas of the Reformation,” the basis of Protestant church doctrine. The five solas are:

1. Sola Scriptura– Scripture alone is the basis for all church doctrine, belief, and practice. (2 Timothy 3:16-17)

2. Sola Gratia– Salvation is by grace alone. It is an unmerited gift of God based solely on His goodness, not our own (because we don’t have any). (Ephesians 2:8-9)

3. Sola Fide– Salvation is through faith alone. Faith is a gift bestowed by God. We are saved only by placing that faith in Christ’s finished work on the cross, not by doing good works or by any other attempts to earn salvation. (Ephesians 2:8-9)

4. Solus Christus– Salvation is found in Christ alone. As Acts 4:12 says, “And there is salvation in no one else, for there is no other name under heaven given among men by which we must be saved.”

5. Soli Deo Gloria– God saves man for God’s glory alone, and Believers are to live our lives to glorify Him alone. (Romans 11:36)

The five solas should be the foundation of the church’s orthodoxy (beliefs or doctrine) and our orthopraxy (church practices). But over the past five centuries there’s been a declension. A downgrade. The church has become deformed from the beautiful biblical portrait of a bride “without spot or wrinkle or any such thing, that she might be holy and without blemish” because we’ve functionally replaced the Five Solas of the Reformation with pragmatic, and often idolatrous, solas of our own making…  Continue reading

Spiritual Disciplines and the Appearance of Wisdom
Who will go into the ‘furnace of fire’ Jesus warned about?